Ludogorets lost from Valencia in the second leg at Mestalla

Ludogorets lost from Valencia in the second leg at Mestalla. This time the champions lost with 0:1 and on aggregate 0:4 leave the tournament. 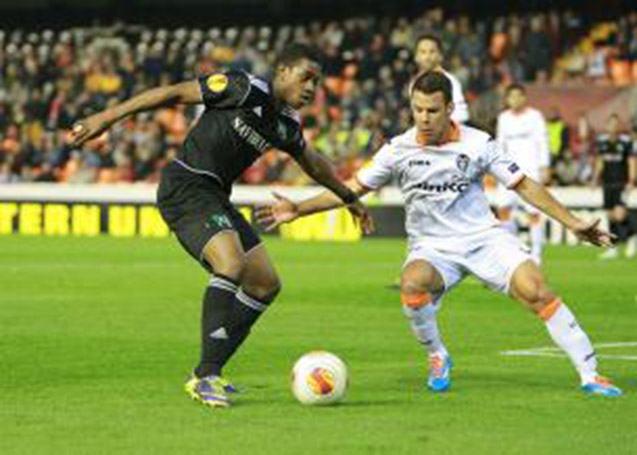 Ludogorets lost from Valencia in the second leg at Mestalla. This time the champions lost with 0:1 and on aggregate 0:4 leave the tournament. Paco Alcacer did the goal in the 59th minute after he rose to head in a hooked ball from the left.

In the 3rd minute Misidjan’s free kick hit the wall. In his 7th minute his strike went past the left post. In the 13th Misidjan again caused problems for the hosts. Dutch star of Ludogorets came dangerously on the left side, but Victor Ruiz was forced to knock it down and received a yellow card.Later Fuego rosed to head in a cross, but Vladislav Stoyanov saved. In the 43th Razgrad players expressed penalty claims . Junior Caicara fell into the penalty area of Valencia, after trying to sneak between two defenders, one of them caught him , but the Greek referee Tasios Sideropulos was speechless .The most interesting situation for the first part was at the end of the first half. In the 45th minute Danny Pareho shot free throws, but luck for Ludogorets - ball bounced off the crossbar in front of the line and slapped then Vladislav Stoyanov gently knocked her tipped over – corner.

The second half started with a miss of the "bats". Paco Alcacer was set up behind the defense of Ludogorets, Stoyanov was late to leave, but his luck the kick of the striker shot over the crossbar. In the 51st minute Moti prevent a certain goal with a superb tackle. Mitchell got a pass behind Minev and tried centering on land to his teammate, located on the empty net, but Moti with a last effort averted. Seconds later, in a counter-attack of Misidjan on left and shot from an acute angle but Alves tipped over.

In the 59th minute the "bats" rejoicing. Fede Kartabia centered sharply left, Paco Alcacer went ahead Moti in front of Vladislav Stoyanov and met the ball with his head sending the ball in the lower left corner of the Bulgarian guard - 1:0.In the 64th minute Ludogorets squandered an excellent chance to equalize. First Bezjak shot after being set up perfectly in the box of Valencia, but Diego Alves saved the ball ended up right at the feet of Mihail Alexandrov, who, however, sent her past the right post. So with a total score 4-0 Valencia ranked 1/4-final where the team meets Basel.