Ludogorets won with 2:1 against Litex Lovech

Ludogorets won with 2:1 Litex Lovech as a guest in the first 1/4 final in the tournament for the cup of Bulgaria. A rematch is on 2 April in Razgrad. 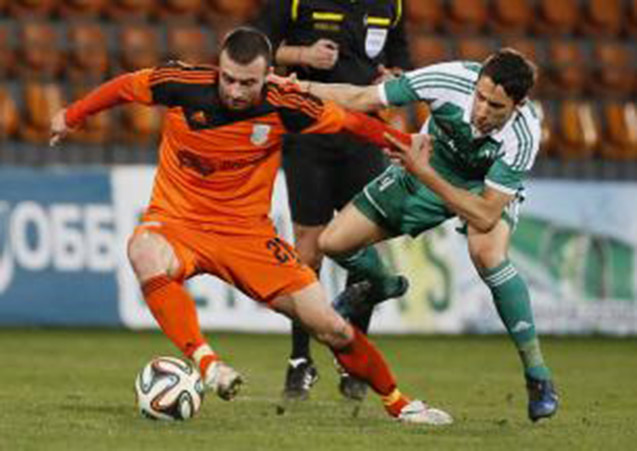 Ludogorets won with 2:1 Litex Lovech as a guest in the first 1/4 final in the tournament for the cup of Bulgaria. A rematch is on 2 April in Razgrad. Hristo Zlatinski and Cosmin Moti had scored for the champions before the break. Substitute Miroslav Manolov reduced in the 70th minute. When catching the hosts had a flagrant foul on Plamen Nikolov against Moti, which was not marked by the referee Nikola Popov.

The match started with a dangerous situation in front of the green. In the 9th minute, the hosts had a good opportunity for goal, but Peter Zlatinov missed the remaining angle alone against Ivan Čvorovič. The Bulgarian champion quickly pulled together and hence to the end of the first 45 minutes to completely dominate. In the 13th minute Ludogorets led. Hristo Zlatinski tallied after the implementation of a direct free kick from small angle.

In the 25th minute Cosmin Moti brought a comfortable lead on his team. Zlatinski shot from foul, the ball hit in front of the goal-keeper who made a mistake in intervention and the ball fell straight to the feet of Romanian that the empty door climbed 0:2.

A little later there was an excellent chance for Jeroen Lumu final to end the dispute. The Dutchman came up alone against the goalkeeper, but slow down and the impact was stopped. In the 32-minute the head referee had mercy on Jordan and didn't show a second yellow card for a dangerous game.

Three minutes before the end of the first part Choco brought with precision pass Junior Quixáda eye-to-eye with Alexandrov. Instead of placing the ball past the goalkeeper of the orange, the Brazilian tried to lie the Defender, slipped and logically wrong. However, the ball fell into Daniel Abalo, who shot without delay, but straight into the hands of the goalkeeper.

In the second part of the game were tore loose a lot. Aside from catching in the goal of Čvorovič and saved red card of Tom, on the pitch was not happening anything interesting. Both teams gambled entirely at one on one battles and furthermore admitted to numerous unforced errors. In the 70th minute, Miroslav Manolov logged as a substitute gave a glimmer of hope to his team for the second leg in Razgrad. The striker took advantage of a shuffle in the penalty box and closely cut to the 1: 2. When scored, however, Plamen Nikolov tackled very rude Cosmin Moti, for which the referee was obliged to give a foul on Ludogorets.

In the 86th minute the referee kept the red card on Tom who did a rude foul on purpose against Zlatinski.