The lawgiver of football fashion and European phenomenon. 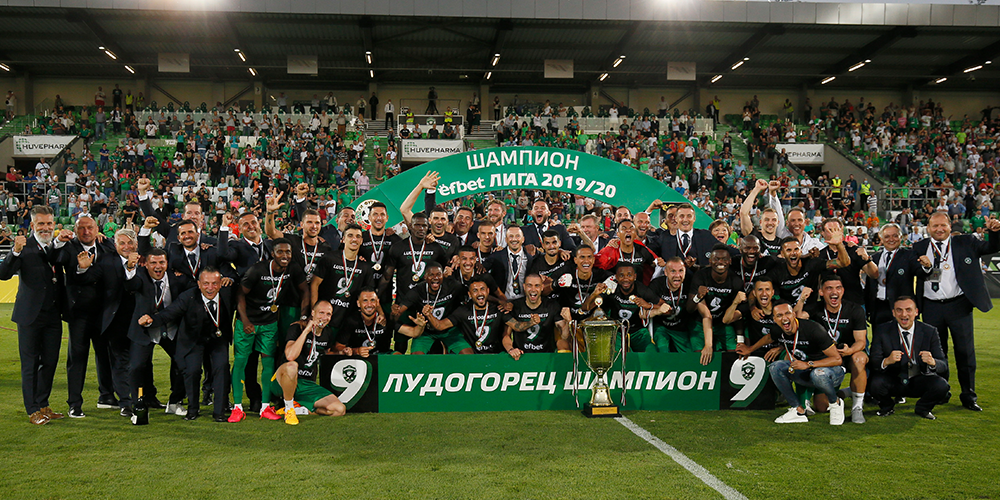 Established in 1945, the Razgrad club was originally participating in Third football division. Their first appearance in the Second division is in season 1961/62, but a promotion to the elite division was not achieved. In the 90’ of the 20th century the team’s name was Antibiotic. The rise of Ludogorets started in season 2009/10, when the team managed to enter Second division. That’s when Ivaylo Petev was designated as a Head Coach. “The Green” won the Second division battle and entered the elite.

Ludogorets’ name was written in the history of world football after winning three cups in the very first season of the club in A PFG. The team, led by Ivaylo Petev, became an undisputable champion after the well deserved win over the record holder of titles – CSKA. The superiority of “The Eagles” in the championship was officially admitted with the victory over “The Red Team” with 1:0 in the 30th final round of season 2011/12. Petev’s players held the precious Champion’s cup with the confidence of being a strong and notable team, having finished with a positive result against the four teams from Sofia. Taken into account, it is a unique achievement and up to that moment it hasn’t been done by a team outside of the capital city.

A little earlier Ludogorets has also won the Cup of Bulgaria at the ”Lazur” stadium in Burgas. The team turned the score from 0:1 to 2:1 in the game against Lokomotiv (Plovdiv), and triumphed with the second most valuable trophy in Bulgarian football. A month and a half later “The Eagles” also won the Super Cup, after their success over the same opponent from Plovdiv, but this time with a 3:1 score.

In all 30 First division matches, as well as the rest for the Cup of Bulgaria and the Super Cup, Ludogorets has demonstrated perseverance and not once has it broke the offensive style of playing, which in the last years was a rare thing to see on the Bulgarian football fields. This created the image of a fighter, recognized by everybody.

In season 2013/14 Ludogorets was a true hegemon in Bulgarian club football. "The Eagles" reached their third consecutive championship title two rounds before the end on May 7, 2014, a year after their victory over Lokomotiv (Plovdiv) with a 1-0 score at "Ludogorets Arena". The winning goal was scored by Roman Bezyak in the 9th minute.

On May 15th, 2014 Ludogorets achieved Golden treble(the second one since their entry in the A PFG) after winning the final game of the Cup of Bulgaria against Botev (Plovdiv) when Roman Bezyak scored the winning goal in the 60th minute. The game for the Super Cup was also won by Ludogorets. Both matches were played at the "Lazur" stadium in Burgas.

Ludogorets’ fourth title came after the 4:! win at homeagainst Lokomotiv (Sofia) on May 15th, 2015. Thesuccess matches perfectly with the official opening of thenew tribune "Moti” and the celebration of the 70th anniversary of “The Eagles". The "Red-Black Team" turned out to be Ludogorets’ competitor for the goldmedals at the end of the championship, although almostall season “The Eeagles" were fighting for the first placewith CSKA.

The balance of Ludogorets’ matches with Lokomotiv(Sofia) and CSKA shows the superiority of “The Eagles". In Razgrad both metropolitan teams were each defeated twice - CSKA with a 2:0 and 4:0 and Lokomotiv (Sofia) with 5:1 and 4:1. Ludogorets achieved draws in the games at "Bulgarian Army" (1:1 and 0:0) and at „Nadezhda" (2:2 and 0:0).

The season was extremely successful in the European tournaments. Ludogorets eliminated Steaua in epic matches in the playoffs of the Champions League and entered the group stage, which achieved the first historic victory over Basel, and draw with Liverpool followed, after which the team performed great against Real(Madrid) - winner of the European Cup for ten times.

11th of May, 2016 – on this date Ludogorets became champion for the fifth time in a row. The same day our biggest rival Levski lost to Lokomotiv (Plovdiv) with a 2:3 score and “The Eagles” became untouchable on the top of the rating again.

Ludogorets already owns the second biggest collection of consecutive trophies in the Bulgarian premiere football championship after CDNA’s nine titles won between 1954 and 1962. Until now the team had the second position along with CSKA, who own 4 titles between 1980 and 1983, but now Ludogorets sits firmly in the second spot alone and is already aiming to overthrow CDNA’s achievement from the 60’s.

The season was kicked off on the rough side for “The Eagles”, who were fourth in the overall ranking for a short time, with six points behind the leader. After Georgi Dermendzhiev returned in November, the team achieved a few wins in a row and after the first half-season they were on the top position. After the spring period of the championship Ludogorets was dominating over its competitors with an impressive 14 points ahead of the second team – Levski. Ludogorets left no doubts in its class and supremacy by achieving a positive balance in the results against every team of the “A” football group except Litex.

Ludogorets won the ninth consecutive title in the club's history after a 2:1 win in the Ludogorets vs Beroe match. The game was a part of the 27th round of the efbet League. “The Eagles” dominated the entire championship which was postponed due to the coronavirus outbreak. Ludogorets defeated Levski three times and achieved three even scores in matches against CSKA. The team was close to even CSKA’s record achievement of 36 matches in a row without a loss. Pavel Vrba’s players, unfortunately, lost to Slavia in the last match. This was the team’s only loss throughout the season.