K. Domuschiev: If we play like this, CSKA won’t stand a chance

„I expected that we would win, because after the game with Chernomorets I began to see that we were coming out of problems, the injuries, and game... 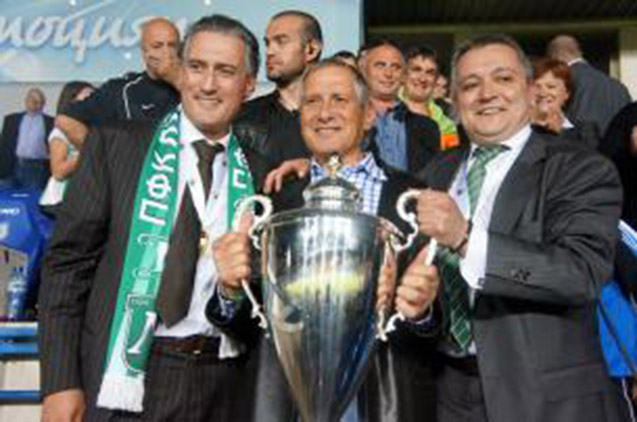 „I expected that we would win, because after the game with Chernomorets I began to see that we were coming out of problems, the injuries, and game was coming back to us”, said Kiril Domuschiev, after his team Ludogorets was awarded with the Cup of Bulgaria. “The eagles” took the trophy at the Lazur Stadium in Burgas, after outplaying Lokomotiv Plovdiv with 2:1.

I didn’t worry when they scored the goal against us, our playing was a lot calmer than theirs. Our class was visible, I was sure that we’d score, and we’d make it to the victory.
Kiril Domuschiev said also that he is expecting Ludogorets to win the title as well.
„If we play the way we’re playing, CSKA just won’t stand the chance”, stressed Kiril Domuschiev.

Georgi Domuschiev, the owner of Ludogorets, said after the victory over Lokomotiv Plovdiv at the final for the Cup of Bulgaria that he wants a triumph in the championship as well.
„While we were behind, normally, we were afraid that we might lose, but in the break friends and colleagues said that we were playing better and we were going to win”, commented he.

„Ludogorets showed one more time, that it’s a team with phenomenal spectators. It’s a small-town team, but a lot of fans support us, the stadium is full in all of our matches, we attract as much spectators as the big teams. And today, they supported us all the way, until the end.
We’ll give everything of ourselves in the battle for the title. I hope we make it.”, said Georgi Domuschiev about the team’s ambitions in their first in history participation in A PFG.