Ludogorets won a decisive match in the battle for the title

Ludogorets demonstrated a high football class in a hard match against Chernomorets, outplaying it by 3:1. 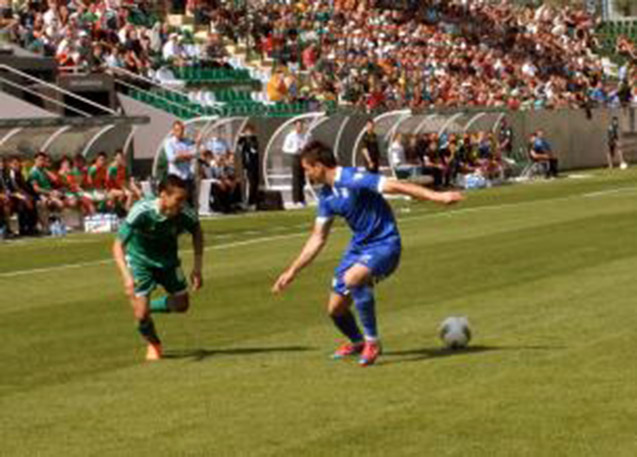 Ludogorets demonstrated a high football class in a hard match against Chernomorets, outplaying it by 3:1.
Some brilliant strikes by “the eagles’ ” goal-scorers Ivan Stoyanov and Emil Gargorov brought the decisive three points, raising the team’s chances for the title.

The game started very intensely, and the first attack of “the sharks” led to their first goal scored just 4 minutes after the beginning. After a confusion in front of the hosts’ goal post, the ball hit the upright, Kostadin Dyakov took control of it and scored.
The massive attacking of the ludogorians towards the goal post of Stoyan Kolev didn’t result in scoring, followed by several missed shots by Emil Gargorov, Lubomir Guldan and Stanislav Genchev.

The twist happened in the 31st minute – Ivan Stoyanov initiated an attack, passed to Gargorov in the penalty area, he passed the ball back to Stoyanov, who shot at Stoyan Kolev’s goal and scored.
In the 34th minute the coach of the visiting team Dimitar Dimitrov – Hero, had to taken out of the field, escorted by the police. He entered the field to argue with the head referee Stefan Spasov about a confrontation between Miroslav Ivanov and Lourival Assis.

The head coach awarded a penalty kick to Ludogorets when, in the 38th minute, Oualembo fouled Marcelinho. Ivan Stoyanov stroke and raised the score to 2:1.
Shortly after, a new dangerous shot towards the goal of the visiting team was cleared by Stoyan Kolev. Emil Gargorov surmounted the defense by himself, and, alone against the goalkeeper, he took a shot, but Kolev managed to change the ball’s trajectory and it got out of the goal.
The goalie was awarded a yellow card during the additional minutes of the first half-time for insulting the referee.

Ludogorets kept delighting the spectators with beautiful combinations during the second half, and the visiting team’s defense was crushed. In the 65th minute Ivan Stoyanov caught a good pass, took control and passed to Emil Gargorov, who was in his position. The captain scored a beautiful goal from 10 meters away.

Todor Palankov, who seriously fouled Alexandre Barthe on the field in the 75th minute, was directly awarded a red card. Two minutes later Marcelinho showed some class killing the defense and passing to Kascelan, who’d entered during the second half. However, he missed.

„I think we had a real derby. We were imposing the rhythm on the field. We scored three goals and created a lot of goal-scoring opportunities. We played with good mood and enthusiasm. Winning the game was a logical result. Disputes and contestations are a natural thing when there is an emotional intensity such as the one that this game had.” said Ludogorets head coach Ivaylo Petev.
In his opinion, the referee Stefan Spasov did well conducting the match, regardless of the claims of the visiting team’s side.
„About the red card – it was for a 100% kick without a ball”, pointed out the coach.