Ludogorets won their first valuable trophy after a hard match against the pretender Lokomotiv Plovdiv. 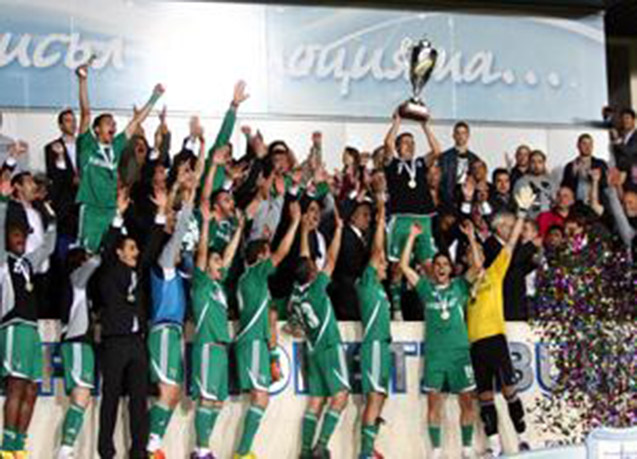 Ludogorets won their first valuable trophy after a hard match against the pretender Lokomotiv Plovdiv. “The eagles” won the Cup of Bulgaria – the first prestigious title since the club’s creation in 1945.
Ludogorets showed some strong personality, keeping the speed high during the entire match at the Lazur Stadium in Burgas. Their victory with 2:1 was well deserved.

The scorting started with a goal in favour of Lokomotiv Plovdiv. Dakson da Silva scored in the 18th minute of the game, after a breaking through in the penalty area and striking a diagonal shot.
In the 30th minute the goalkeeper Uros Golubovic cleared a dangerous shot by Zdravko Lazarov.
Ivan Stoyanov was really close to scoring in the 42nd minute, but Ivan Karadzhov saved.

The fans of Plovdiv’s team made it impossible to play in the beginning of the second half, throwing numerous smoke bombs on the field. The head coach had to take both of the teams in the locker rooms for 5 minutes, while the policemen take the fireworks away.

During the second half time the “ludogorians” took control over the game and pressured the Plovdiv players in their half. The 1:1 goal arrived in the 72nd minute, when Gargorov gave a throughout pass to Marcelinho, who scored with gracefully.
6 minutes later the combination between Badema and the Brazilian star repeated itself and Marcelinho scored past Plovdiv’s goalkeeper.

Mihail Alexandrov, who entered during the second half-time, missed a pure scoring-opportunity, sending the ball straight into Ivan Karadzhov’s hands in the 83rd minute.
At the very end of the match Youness Bengelloun was sent off receiving a direct red card because of a serious foul in the penalty area.

„Congratulations to Ludogorets on the victory. They ended the game the way they started. They kept the rhythm high, we couldn’t follow. We stopped at 1:0, we slowed down. During the second half-time we lost it rather mentally than physically”, admitted at the end of the match Plovdiv’s head coach Emil Velev.

„We are happy of the fact that we won the first cup in the club’s history. After the first part, during which we weren’t very convincing, we made some corrections, we increased our level of combinativity and it was enough for us to win”, commented Ludogorets’s head coach Ivayo Petev.

Ludogorets triumfing with the Kup