Brave Ludogorets succumbed to an undeserved defeat against Real Madrid 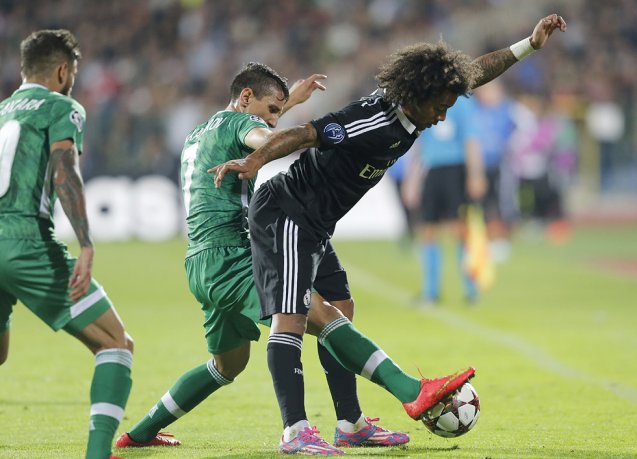 Another great European performance and a high-class display by Ludogorets against the most successful football club in the world – Real Madrid, ended with an undeserved 1-2 defeat. Marcelinho opened the scoring in the 7th minute. The Scottish referee Craig Thompson awarded two penalty kicks in favor of Real. The first penalty kick taken by Ronaldo was brilliantly saved by Vladislav Stoyanov. Real Madrid’s superstar converted the second one though despite goalkeeper Stoyanov guessed the right again. Karim Benzema scored the winner in the 78th minute from Marcelo’s cross.

Ludogorets took the lead in the 7th minute. Marcelinho took advantage of his excellent position within Madrid’s goal area and headed home from close range to make Iker Casillas take the ball out of his net. Four minutes later Real Madrid were awarded a penalty by the referee Thompson for Minev’s foul against Chicharito. Cristiano Ronaldo stepped up and shot to the right but Vlado Stoyanov saved. The Scottish referee pointed to the spot again in the 22nd minute following Ronaldo’s tumble after contact with Moti. Blancos’ superstar stepped up again and made no mistake to level the score. Ludogorets played excellent till the end of the first half where Real’s goalkeeper fine saved Mihail Aleksandrov’s shot. A controversial offside call prevented Roman Bezjak from giving the lead to the home side.

In the beginning of the second half Cristiano Ronaldo missed from short distance after having outrun Caicara in the penalty area. Shortly afterwards Stoyanov saved Bale’s header. Eagles’ response was Espinho’s kick blocked by Casillas followed by Madrid’s classic counterattack started by Gareth Bale and ended with Chicharito’s dreadful miss. Iker Casillas showed his class again in the 66th minute by deflecting the ball into corner following Marcelinho’s crafty shot. In the 78th minute Madrid went ahead after Benzema’s goal. The striker scored in open goal after Marcelo’s cross leaving doubt for supposed foul against Aleksandar Aleksandrov. The referee Thompson didn’t call a penalty in the 83rd minute for a crystal-clear foul against Virgil Misidjan in the penalty area.