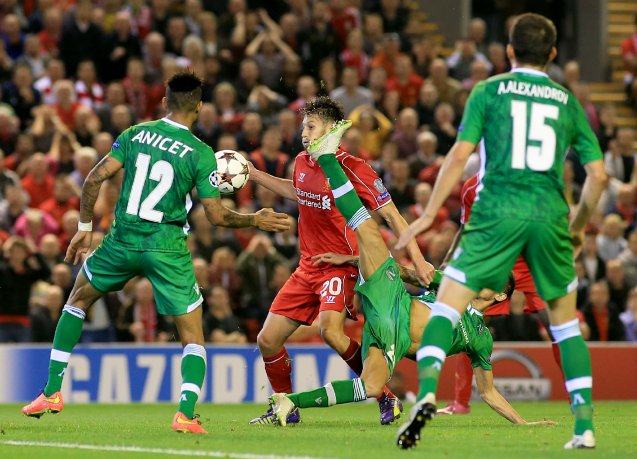 Ludogorets made an amazing debut in the UEFA Champions League group stages. The Eagles lost 1-2 to the great FC Liverpool at Anfield in a dramatic match with three late goals.

It was Mario Balotelli who opened the scoring in the 82nd minute but seconds from the end of regular time the substitute Dani Abalo equalized after Younes Hamza’s exquisite pass. And then came the 93rd minute and Aleksandar Aleksandrov’s poor back pass to goalkeeper Borjan who was dispossessed by Javi Manquillo. Liverpool’s player fell down and, although there was no direct threat for the Eagle’s goal, the referee pointed to the penalty spot. The captain Steven Gerrard converted the penalty into a goal and secured the 2-1 win for the Mercysiders.

Shortly before the three goals the Bulgarian champion had several excellent opportunities to take the lead. Caicara’s long-range shot was first batted away by Mignolet and the Reds were lucky to see Bezjak not taking possession of the ball to send it into the empty net. Several minutes later a perfect combination ended with Bezjak’s shot against the right post. Seconds before Balotelli’s goal, Marcelinho broke in but missed the moment to shoot and was dispossessed. Liverpool’s counterattack ended with the opening goal of the Italian striker.

Earlier this day the Ludogorets U19 team also started the UEFA Youth League with a defeat. The players of Atanas Dimov and Todor Zhivondov lost 0-4 to Liverpool U19.