Ludogorets conquers top of championship with victory over Minior

After the 4:1 categorical victory against Minior, and CSKA losing from Slavia, “the eagles” reached deservedly the top of First Division current rank. 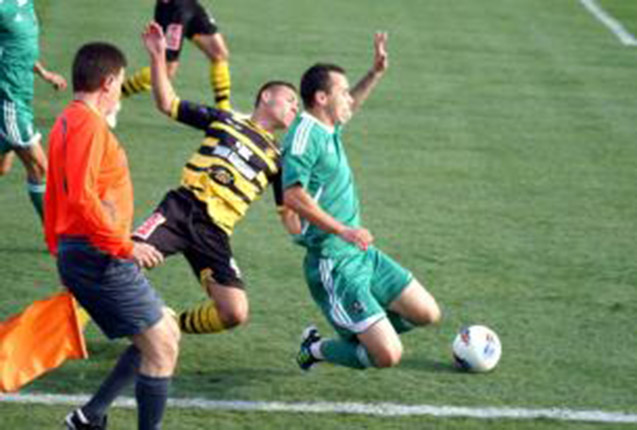 After the 4:1 categorical victory against Minior, and CSKA losing from Slavia, “the eagles” reached deservedly the top of First Division current rank.
Ludogorets scored its 8th victory in a row since the beginning of the championship. It was a close run match, but the Razgrad players showed their superiority after a twist of events in the beginning of second half-time.
Visiting team scored the first goal in Uros Golubovic’s net. It was Fares Brahimi’s direct hit in the 11th minute of the match. After the goal though hosts quickly took the initiative on the field.
Second half-time Ludogorets displayed its true superiority. Equalizing goal was scored in the 48th minute, after a precise shot by Alexander Barthe. French defender caught out the ball after a corner kick.
Second goal for the hosts was realized in the 68th minute. Choco took advantage of a crack in the visitors’ defense, and by a chip shot from a bigger distance, he scored the most beautiful goal of the match.
His assistance led also to third goal in visitors’ net. It was realized by Marcelinho, in the 87th minute. Final shot was in the 90th minute, by Todor Kolev, who made his entrance in the second half-time, as a change for Miroslav Ivanov. Kolev scored as a result of penalty kick awarded.
Visitors’ aggressive way of playing was more than once sanctioned by the referees. Yellow penalty card was shown to goalkeeper Ivan Chvorovich, to Nikolay Hristov, and Ivaylo Stoyanov. After red card, due to second offense committed, Kostadin Markov was suspended from the game in the 30th minute.
Yellow cards were received also by the hosting team’s players Yordan Minev and Mihail Aleksandrov in Ivan Stoyanov’s place.
“Ludogorets is a good team, impressing for their playing.”, commented Minior’s head coach Stoycho Stoev after the game.
“After the visiting team scored, due to serious error of our players, we took over the game and, logically, we won with 4:1. It was possible to see that our team is not only better, but classes higher”, said Ivaylo Petev, head coach of Ludogorets.