The big Romanian team Dinamo knuckled under to Ludogorets in a friendly at Ludogorets Arena, in front of 4000 viewers. 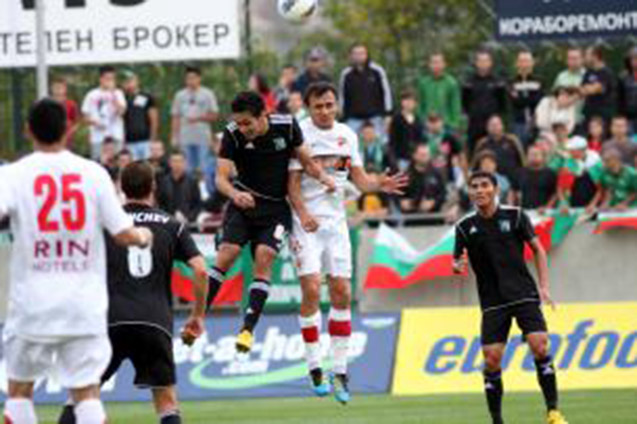 The big Romanian team Dinamo knuckled under to Ludogorets in a friendly at Ludogorets Arena, in front of 4000 viewers.
“The eagles” achieved an extremely prestigious victory over our Northern neighbor’s championship leader. “The greens” kept making goal attempts, and the match ended with 2:1.
Christian Kabasele scored the second goal, being the goal of victory, just a few minutes after he debuted in Ludogorets. Belgian national player scored in the 91st minute, hands-down, alone against the visitors goalkeeper.
Ivaylo Petev’s boys were the better team on the field almost the entire match and their victory was well-deserved. There were a lot of interesting moments before the visiting team’s goal during the first half-time, though result remained without goals scored.
Right after the break the hosts took the lead after a well-aimed shot by Marcelinho, who compensated for the omissions during the first half-time. The offender was found in Dinamo’s penalty area, where he took hold and the Romanian defense didn’t stand a chance against his precise kick from the penalty mark.
The score was equalized in the 67th minute – the ball passed to the offender Marius Niculae, who scored 1:1 with head, from three meters.
“I would take the entire team of Ludogorets in Dinamo, I loved the team’s playing. It’s obvious that Ludogorets and CSKA are the favourites for the title of Bulgaria”, said the Romanian leading team’s head coach Liviu Ciobotariu after the match.
Ivaylo Petev, head coach of “the greens”, was the more criticizing one in his analyze about the game. “We played a valuable friendly that mattered. We played against a strong team which doesn’t need an introduction. We played as I wanted us to play, as we did up to the present moment, and as I’d like us to play in the spring half-season. What I didn’t like was that we missed some goal attempts during the first half-time and we let a simple goal to be scored in the second part.”, said Ivaylo Petev.
The big team Dinamo (Bucharest) is a leader in Romania’s national championship after the 9th round. The team has a 4 points precedence over the rank’s second, and it’s the favourite for the national cup. The match in Razgrad has been observed by five national TV-channels in our Northern neighbor.

The group of Ludogorets