Ludogorets secured matches in Europe in the spring as well, after beating Finnish HJK Helsinki 2:0. Thus, the champions drew 3 points on Roma,... 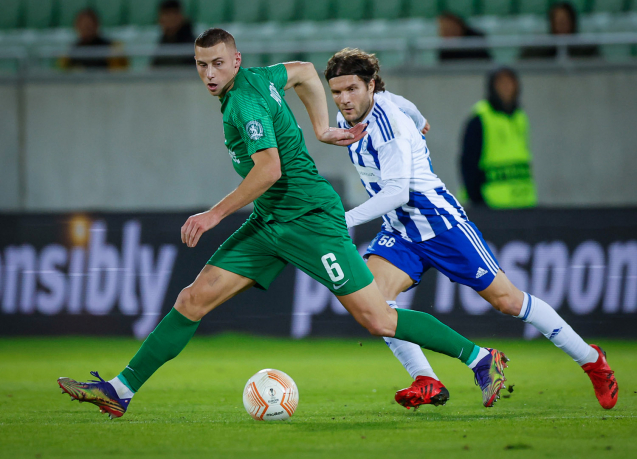 Ludogorets secured matches in Europe in the spring as well, after beating Finnish HJK Helsinki 2:0. Thus, the champions drew 3 points on Roma, continuing to hold on to second place in Group C of the Europa League. Razgrad team cannot fall below the third place, which means that they have a guaranteed place in the 1/16-finals of the Conference League.

The first situation came in the 15th minute, when Jakub Piotrowski missed the goal with a header after a cross from a corner. Two very dangerous shots by Tekpetey and Anton Nedyalkov followed, but they did not trouble Conor Hazard either.

The logical thing happened in the 39th minute. After a good attack from the left, Rick knocked with his heel for Danny Grouper, who surprised Conor Hazard with a powerful shot - 1:0. Cowley then attempted a technical but failed. The visitors could have equalized after a mistake by Verdon, but Sergio Padt saved Abubakari's shot.

At the beginning of the second half, Cicinho intervened decisively after a shot by Hostika and scored. Cauly's header followed - out. After an hour of play, Ludogorets made an excellent counterattack, and at the end of it, Cauly's would, but he almost missed scoring.

The score became 2:0 in the 65th minute. Tekpetey stole the ball from Hostika and went out on his own against Connor Hazard, cut it back for Rick and he couldn't make a mistake with his left foot.