Ludogorets climbed to the second place in the First League after a success over CSKA with 2:1 in a very contested derby. The hero for the Eagles was... 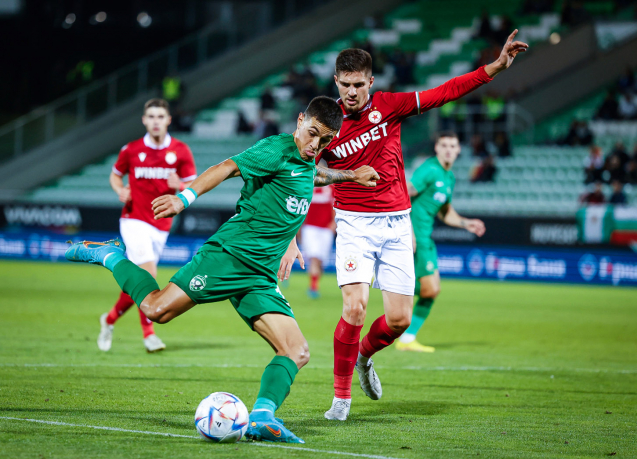 Ludogorets climbed to the second place in the First League after a success over CSKA with 2:1 in a very contested derby. The hero for the Eagles was Polish Jakub Piotrowski, who scored a masterful goal in the 79th minute. The Eagles had previously taken the lead through Matias Tissera in the 9th minute and Amos Youga equalized in the 55th minute. Thus, Ludogorets broke its streak of 4 matches without a win in all tournaments.

Home coach Ante Simundza has expectedly gone for the best, regardless of the important HJK Helsinki match on Thursday. If it is won, the Razgrad team will play in Europe in the spring. Matias Tissera led the charge, supported from the back by Cauly, with Kirill Despodov and Rick Jhonatan on the wings. The captain Anton Nedyalkov was returned to the middle of the defense, after acting as a left back in Finland.

Ludogorets created its first chance in the 2nd minute. Gruper tried a through ball to find Matias Tissera, but it went wide. CSKA responded with a shot by another Latin American – the Colombian Brayan Moreno, but in an out.

The Eagles took the lead in the 9th minute. Denny Gropper brought in Rick Jhonatan on the left. He easily overtook the slower Jurgen Mataj and served the ball to Matias Tissera, who simply couldn't make a mistake - 1:0. Shortly after, an inspired Rick tried a long shot but over the goal. In the 17th minute, Tissera slipped behind the defense and found Cauly. He immediately brought out Despodov, but his shot missed the target. In the 34th minute, Sasa Ilic's team was very close to equalizing. Thibaut Vion crossed from a free-kick to Mauricio Garces, who beat Denny Grupper and headed straight at Sergio Padt. In the 43rd minute, Zhirayr Shaghoyan tried his luck with a direct free kick, but his dangerous shot was saved by Sergio Padt.

In the 50th minute, Cowley took the referee's ball from Amos Youga and found himself in a great position. However, his pass to Tissera was intercepted by Hristiyan Petrov. The "Reds" responded with a shot by Stanislav Shopov, but he was also not accurate. Garces then heads again, but right at Padt. In the 55th minute, Brayan Moreno's shot was cleared for a corner by Sergio Padt. After his performance, Thibaut Vion put the ball on the head of Amos Youga, who equalized from close range. In the 60th minute, Denny Grupper tried his aim, but the ball went out. Seconds later, Brayan Moreno made a pass. He received a pass from Thibaut Vion but miraculously missed the target from close range. In the 69th minute, Ludogorets asked for a penalty after a duel between Amos Youga and the newly entered Bernard Tekpetey, but the referee Georgi Kabakov did not respect their wish, and on top of everything he gave a yellow card for a word from the Ghanaian.

In the 73rd minute, the reserve Duckens Nazon had a chance to shoot, but he missed the goal with his left foot, although the ball went very close. Three minutes later, Girair Shagoyan tried his sights from a free-kick but missed the target and Sergio Padt had also covered his corner.

Ludogorets took the lead in the 79th minute. After a gradual attack from the left, Rick found Grupper, who cleverly passed to Piotrowski. The Pole, with a perfect shot on the ground, left no chance for Gustavo Busato - 2:1.

In the 89th minute, Shagoyan sent a very treacherous shot towards Padt's goal, but the home guard again showed his class. In the continuation of the meeting, Ludogorets was very close to a third goal. Igor Thiago won the duel with Amos Youga and found himself alone against Busato, but the guard saved. The ball went to Rick, who found Tekpetey, but he missed the empty net.