Ludogorets regained second place in the First League after a 4:0 win over Beroe in Stara Zagora. Above all was Bernard Tekpetey, who scored two goals... 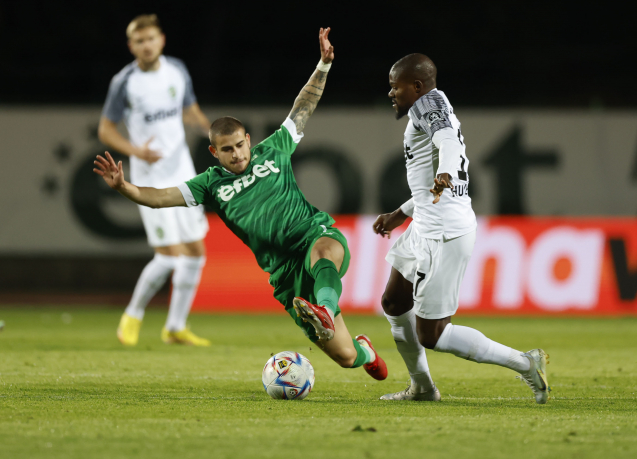 Ludogorets regained second place in the First League after a 4:0 win over Beroe in Stara Zagora. Above all was Bernard Tekpetey, who scored two goals and assisted Igor Thiago's goal. The fourth goal was the work of reserve Matias Tissera. All the goals came after the break.

The visitors could have taken the lead in the 7th minute. Rick Jhonatan then continued to head the ball to Igor Thiago who advanced into the opposition half. A pass followed to Cowley, who found himself in a wonderful position, but Ivan Karadjov made a masterful save. Just a few seconds later, Bernard Tekpetey also tried his aim, but it was offside. Ludogorets continued to press and in the 16th minute, Thiago was brought behind the defense, but he slowed down, and besides, he did not hit the goal.

In the 28th minute, Ivan Karadzov showed his class again, hitting a terrific shot under the crossbar, the work of Cauly. In the 34th minute, the very active Bernard Tekpetey managed to overcome Beroe's defense, but the goal was disallowed due to an offside. Three minutes before the end of the first half, Tekpetey overcame Karadjov again, but again there was an offside, in this case on Cauly's pass to the Ghanaian, who can play for his country at the 2022 World Cup.

In the 50th minute, Beroe's captain Simeon Mechev tried, but it was not accurate. In the subsequent execution of the throw-in by Sergio Padn, the ball ended up in Tekpetey, who this time could not be stopped by Ivan Karadjov - 1:0 for the guests. Thus, the Dutch guard scored an assist. Two very serious situations followed for Ludogorets. In the first, Rick Jhonatan literally gifted the ball to Ivan Karadjov, and then the guard again frustrated Cauly with a famous save. After an hour, Igor Thiago could have put an end to the dispute by receiving a superb pass from Tekpetey, but he did the trick and missed.

Berroe could have equalized in the 63rd minute when substitute Steve Traore burst in behind the defense but was unable to beat Sergio Padt. This was followed by a shot by Simeon Mechev from a foul, but over the goal.

In the 74th minute, Ludogorets put an end to the dispute. Bernard Tekpetey took the ball from Simeon Mechev and passed it to Igor Tiago, who could not make a mistake this time - 2:0 for the people of Razgrad. The situation was reviewed for a foul by the Ghanaian against the home captain, but referee Valentin Zhelezov did not change his original decision. In the 78th minute, Cowley brought the unstoppable Bernard Tekpetey alone against Karadjov and the Ghanaian finished appropriately – 3:0. Three minutes later, Ludogorets' lead went up to 4:0. Jakub Piotrowski found another substitute - Matias Tissera, who was flawless with his first touch of the match.