Ludogorets was awarded for football development after just one half season in the elite league. 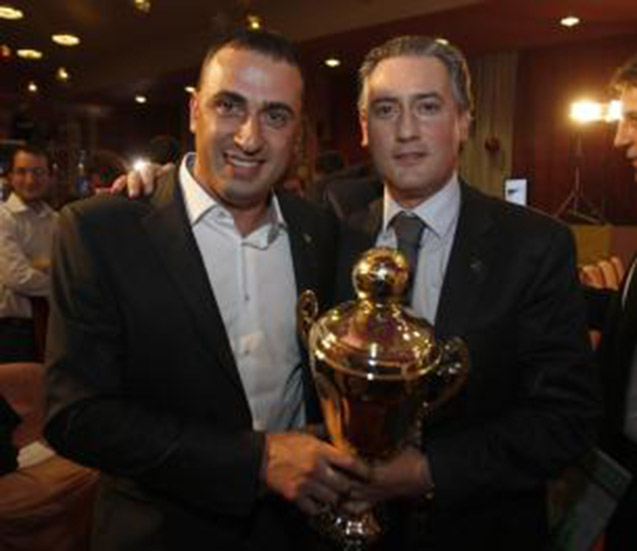 Ludogorets was awarded for football development after just one half season in the elite league. Captain of the team Emil Gargorov got the Cup for best midfielder in Bulgaria for 2011.
At the Footballer of the Year ceremony, investor Kiril Domuschiev was given the award for football development during the year.
„We bestow this award for everything that was done for the club and the Youth Academy. We were in Razgrad to see it for ourselves”, stated Vesela Lecheva, President of the State Agency for Youth and Sports.
„We have an exceptional appreciation for this Cup. It represents a great recognition for the entire club, for the coaches, for what’s been made for a year and a half.
The award shows our substantial progress in football. We will keep going with double effort on the path that we’ve taken”, said Kiril Domuschiev, receiving the award.
Emil Gargorov won the award, competing with his teammate Marcelinho, and Georgi Milanov from Litex. “I thank to the players of Ludogorets. Without them this award wouldn’t be a reality”, said Gargorov. Two more players were nominated as best in the country at their positions. Alexandre Barthe was nominated for best defender, and Mihail Alexandrov – most progressive young player.
The award Footballer of the Year was presented to Twente’s goalkeeper Nikolay Mihaylov. Second place went to the captain of Aston Villa and our national team Stiliyan Petrov, and third place - to Dimitar Berbatov from Manchester United.
Footballer of the Year awards are bestowed for a 51st consecutive year. Final ranking was a result of the voting of 128 journalists from 55 medias.

"We might win more awards in the future, but I hope that we will earn these mostly by playing. It would be very good for us to make it to the classifications and play in Europe either in Europa League or another tournament – we’ll see about that.”, said Domuschiev after the ceremony.
On the question if the team guided by him is aiming at the champion title of the country, he stated: “It’s too early to talk about titles right now. There are a lot of things to change in our club, things to improve, so we could raise our level.”
He defined the vote for Vasil Lukaev from the village team Shipka (Dragor) as a negative moment, yet a definite vote of protest of the fans.
"I hardly doubt that the problem with CSKA’s players accused in doping use happened with the consent of the club. I think the doctor of the team is the one to blame for this accident. However, it will definitely affect CSKA’s reputation and it’s certainly unpleasant for the club itself.”, added Domuschiev.