Ludogorets will be in pursuit of becoming a champion, as well as winning the Cup of Bulgaria. 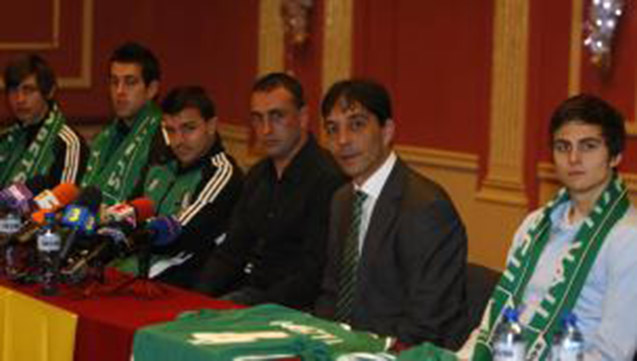 Ludogorets will be in pursuit of becoming a champion, as well as winning the Cup of Bulgaria. The goal was stated during the team’s first press conference at the Tsarsko Selo resort in Sofia.
"Based on our presentation and capacities in the autumn, it’s a realistic goal. We will be in pursuit of becoming a champion not only now, but every single year from now on.
Honestly, I didn’t expect that we would achieve these results so fast. After all, we made a new team. However, the boys got to work well together very fast”, said Head Manager Ivaylo Petev.
He emphasized that the team is going to strive with the same ambition for the champion title as well as for the Cup.
"We are a new team. We miss trophies in our glass-case and we need to fix this as soon as we can”, said Petev.
Ludogorets is a long term project. We will strive for the first places and we won’t be satisfied with a place somewhere in the middle of the rank list.
A proof for our serious intentions is that even in this bad weather the construction of our training base continues.
“Another long term investment are our young players. We will keep selecting young players who have a big future ahead of them”, stated the Executive Director Angel Petrichev.
Ludogorets’s management stated also that the pressure, due to the set goal, will not diminish the footballers’ effectiveness. Ludogorets’s players are experienced, they’ve won titles and cups.
Executive Director Angel Petrichev announced also that Todor Kolev, Dimo Atanasov and Miroslav Antonov are now on the team’s transfer list. If not sold during the transfer window, they will be loaned to other clubs.
"Adding another four new footballers will increase the competition in the team. That’s why we need them. It will be no surprise if by the end of the transfer period we add another one”, said also Ivaylo Petev.