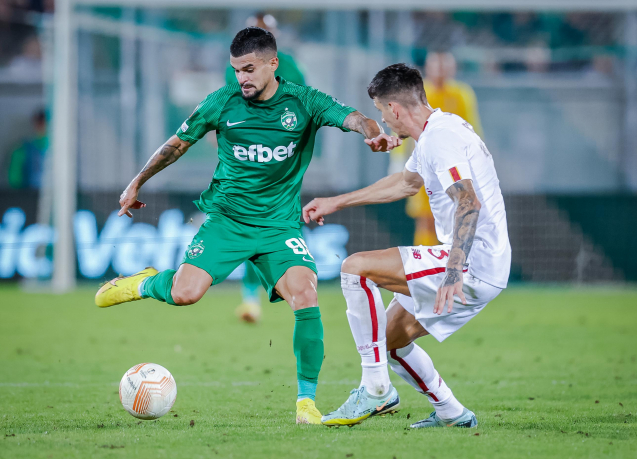 Great match of Ludogorets! Razgrad team beat Conference League winners Roma 2:1 in a Group C match of the Europa League. The Eagles are second in the standings after Betis' 2-0 away win over HIK. Next week, the champion of Bulgaria visits the green and whites in Seville.

In front of the crowded stands of "Huvepharma Arena" Ludogorets played great and showed character. At the very beginning of the match, after a great counter attack, Kiril Despodov came out in a good position and passed to Tekpetey in front of Roma's empty goal, but the Ghanaian winger did not take a step to intercept the ball. In turn, the "wolves" had some situations, but Sergio Padt was stable, and once the crossbar helped him after a shot by Mancini.

The second half was also evenly matched until the 72nd minute when Ludogorets opened the scoring. Cauly made a great solo raid and sent the ball into the net with his left foot. Roma equalized in the 86th minute through Shomurodov, who headed the ball into the net. 120 seconds later, new signing Nonato, introduced as a Ludogorets player a few hours earlier, scored a historic goal for 2:1 and Jose Mourinho lost for the first time in Bulgaria. The former Internacional and Fluminense man received the ball in the penalty area from Rick Jhonatan and a superb play put him in a clear position from where he scored the winner to send the 10 000 crowd at the "Huevepharma Arena" into ecstasy.