Ludogorets completely dominated over Dinamo Zagreb, but ended with a draw

Ludogorets made a spectacular match at their debut, in the Champions league Second qualifying round. 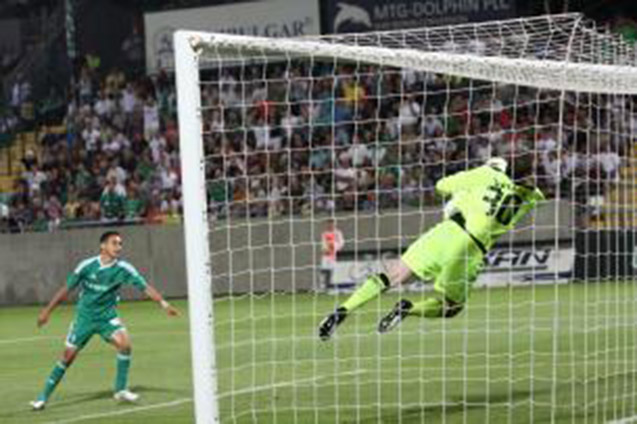 Ludogorets made a spectacular match at their debut, in the Champions league Second qualifying round. However, a goal in the additional time stopped “the eagles” from congratulating themselves on the victory that they deserved.

During the first half-time the hosts were dominating, but the numerous hits towards the guests’ goal remained without realization. Ivan Stoyanov stroke at Kelava’s goal in the 7th minute, yet, it ended out. Marcelinho attacked after Emil Gargorov’s kick in the 11th minute, but the guests’ goalkeeper managed to clear.

Ivan Stoyanov attacked Dinamo’s goal one more time in the 33rd minute, but the keeper saved, followed by three more attacks, by Stanislav Genchev and Ivan Stoyanov. However, the half-time ended with 0:0.

In the second half-time the hosts imposed their own rhythm again. The goal was scored in the 67th minute, after Ivan Stoyanov’s pass for Marcelinho who caught it on head.

Ludogorets had a chance to double the score in the additional time, but Mihail Alexandrov, who entered as a substitution, missed, depriving the team from victory. Franck Guela organized an attack, passing the ball to Alexandrov on the goal line, but he was late to cross the pass, missing an empty goal.
A gorgeous intervention of Caiçara in a dangerous situation, where the goalkeeper Golubovic was down, saved the hosts from a 100% goal. He cleared the ball from the goal line seconds before it’d get into the net.
An attack of the visiting team, a minute before the last referee signal, was successfully finalized by Ante Rukavina.

Ludogorets’s owner Kiril Domuschiev made a sharp comment against the decisions of the Czech referee Radek Prihoda. „Us, Bulgarians, we mean nothing to them. The referee didn’t award penalties and direct red cards. If this had happened in the Bulgarian championship, referee would’ve been declared corrupted”, said Domuschiev at the end of the match.

“I’m happy with the effort and playing of the boys. They totally outplayed the Croatian team, they played with confidence. A serious mistake on our part in the 90th minute led to losing the ball. We had to make a foul, and we didn’t.
We won’t be making fundamental changes until the return match in Zagreb. I hope for more luck”, commented Ludogorets’s manager Ivaylo Petev after the match.

„I had great respect for the opponent, but watching matches of their team, I thought that they were a surmountable obstacle”, said the head coach.