Ludogorets has drawn the game with Litex, in spite of outplaying the team

Ludogorets took only one point from Litex, on their own field, despite their absolute supremacy over the team from Lovech. 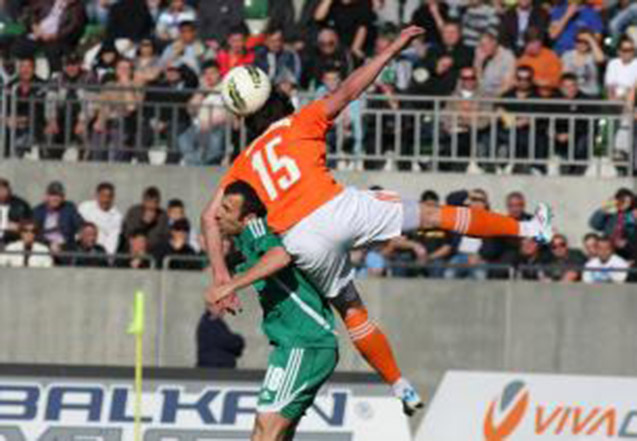 Ludogorets took only one point from Litex, on their own field, despite their absolute supremacy over the team from Lovech. The game ended 1:1, with a lot of missed opportunities for score in Ilko Pirgov’s goal.

During the first half-time the hosts exerted strong pressure on the other team on the field.
The guests reacted by means of an aggressive playing, which led to a lot of fouls, interruptions and injuries. By the end of the game the orange team was given 5 yellow cards by the head referee Kalin Lyudmilov.
Marcelinho missed a possibility to score in the 25th minute, when he took a shot from the penalty area, but the ball passed near the right upper corner of Lovech’s team’s goal. During the first half-time the Brazilian missed another 2 opportunities to score, his shots ending up directly in Pirgov’s hands.

The forward Christian Kabasele had a serious injury when, in the 33rd minute, him and Vasil Bozhikov hit their heads, Christian had a concussion and he had to be substituted by Dimo Bakalov.

The second half also passed off at “the eagles’ “ prompting.
In one of Marcelinho’s attacks towards the goal he passed to Dimo Bakalov, who was unfairly impeded, but the referee didn’t award a penalty. Ivan Stoyanov joined the situation and had a possibility to strike, but his shot was cleared by Itua, who played with hand. However, once again, a penalty was not awarded to Ludogorets.
Marcelinho made a double pass in the 63rd minute, yet again he couldn’t score.

Scoring was opened by the guests in the 75th minute, when, after a counterattack, Momchil Tsvetanov managed to get past the goalkeeper.
Five minutes later Stanislav Genchev made the score equal (1:1) after Mihail Alexandrov’s assist. By the end of the match “the eagles” exerted absolute pressure, but they couldn’t score again.

„We made a good match that showed everyone that I don’t make deals.The boys did not get scared”, commented Litex’s head coach Hristo Stoichkov after the game.
„I’m contented with the playing of the footballers, but we missed valuable situations. We lost two points. When you play well and you don’t score, it’s disappointing.
We were aggressive, combinative, yet not so concentrated”, said “the eagles’ “ head coach Ivaylo Petev analyzing the game.