Kiril Domuschiev was interviewed by one of the world’s biggest media companies – the beIN television network. The interview will be part of a... 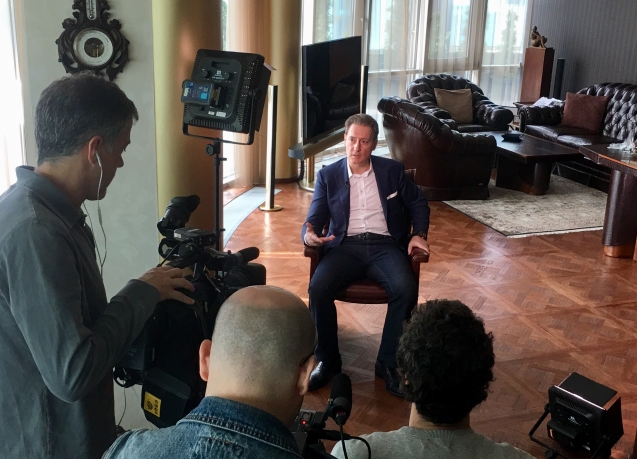 Kiril Domuschiev was interviewed by one of the world’s biggest media companies – the beIN television network. The interview will be part of a 45-minute documentary which is currently being filmed by the Spanish subsidiary of the media company. The entire documentary is dedicated to Bulgarian football and more specifically to Ludogorets. The owner of the six-time Bulgarian champion club welcomed the beIN crew, led by Bruno Sans, in his office. Mr. Domuschiev answered to every question in Spanish.

On the day prior to the interview, the beIN crew visited Razgrad, where they spent more than seven hours filming the “Ludogorets Arena” stadium, the club base and the town. The journalists from Barcelona were also able to interview the managing director of the club Angel Petrichev, the coaches of the first and second team – Dimitar Dimitrov and Radi Zdravkov, as well as a couple of the players -  Claudiu Keseru and Lukas Sasha.

“I am very impressed by Mr. Domuschiev and the Ludogorets project. We visited other Bulgarian clubs as well, but what I saw here is really incredible”, said Bruno Sans.