Yakov Paparkov: Ludogorets II proved that our Youth Academy is on the right track

The Ludogorets Academy Director Yakov Paparkov said a few words about the past year and the autumn semi-season. According to Paparkov the club... 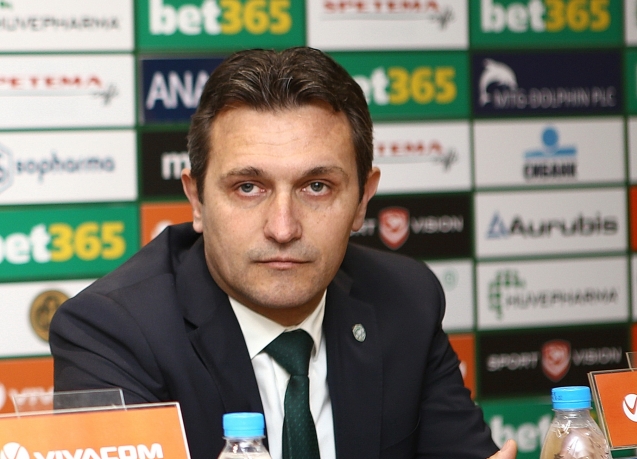 The Ludogorets Academy Director Yakov Paparkov said a few words about the past year and the autumn semi-season. According to Paparkov the club academy is the most prosperous in our country and sending 19-year old players to play against the men in the Second professional league proved to be a successful experiment that helps the boys become better players.

Mr. Paparkov, what is your opinion about the way the Ludogorets Academy evolved last year?
- The first half of 2017 was good and we managed to achieve excellent results because our team became the champion in three out of six groups in total, and we also got two silver medals and the bronze in the last one. We have a very realistic chance of winning a couple of titles in the upcoming autumn semi-season. Unfortunately we dropped out of the BFU cup tournament in the U18 and U16 categories. Our U17 team became the champion in the last two years and this means the boys that are born in 1999 and 2000 performed great, but now we are a step back with those born in 2011.

Do you still feel sorry about dropping out of the Youth Champions League and how can you evaluate the performance of the competitor Zeljeznicar (Sarajevo) compared to Ludogorets?
- I am sorry about that, yes, and the worst part is that we lost in the final few seconds. Our team was the better one, but still Zeljeznicar managed to qualify for the 1/16-finals and later managed to eliminate Lokomotiv (Zagreb). After that the draw determined they will play against Atletico (Madrid) in a single game in Sarajevo. Most of the boys playing there are competing both in the Second professional league and in the elite youth groups up to 19 years of age. The tight schedule did not allow us to prepare in the best possible way for this game and we could have easily taken the win. After these games my opinion is that the Ludogorets Academy has players that are at least on the level of the teams that often are compared with Ludogorets, mostly the teams from Croatia, Romania, Serbia, Slovenia and Macedonia. I think that we are able to surpass their level by putting in the work. If we compare ourselves to the best teams from the most developed countries, we have to admit that there are things that we have to catch up with them.

How can the problem with the tight schedule between the championships be solved?
- I am a member of the Academy Directors Committee alongside the directors of the best academies in the country. During one of our meetings I proposed something that was accepted by everyone – all the matches from the Youth Champions League to be put in the BFU calendar in order for them to be coordinated with the internal championship schedule. This way no matter which of the Bulgarian teams participates in the Youth Champions League, things would definitely be easier.

Everyone knows that the second team is the Academy’s showcase. Sending youth players against the men is an experiment. How do you thing it pays off?
- You know that after the last season we released all of the players who had contracts to play in the second team. Later we assembled a team from our youth players and Ludogorets is the only cloud that did things this way. It is something truly unique for our country and is the proof that the Academy is doing what it is supposed to do. These boys are prepared well enough to have a professional career here or abroad. They have this chance because of the opportunity to play in the second team and then to try their skills in the main team for a while. It was an experiment but it was a successful one and I am happy with the outcome. I am grateful to the team owners and the management for trusting in us and letting us do it. Despite the initial doubt the boys proved that these young boys really dived into professional football and it is impressive how they won against the overall rating leaders who have a lot more experience. Now we have a tough spring season ahead of us but we are eager to confirm what we already achieved.

Where do you notice the best development?
- We have developed in every possible way, but mostly in the psychological aspect, as well as the physical and tactical. The Second league matches are not easy. The development we have has been noticed by a lot of specialists and we are happy about that.

Is this the proper way to go from youth to professional football?
- Absolutely yes – the proof for this is our qualification for the European tournament in Georgia with the boys that are born in 1998. It happened due to the fact that we and CSKA-Sofia both had teams in the second league and Slavia also tried to put some of the youth players in the main team. Giving the young talents a chance contributed a lot for this success.

A lot of the boys playing in the Elite Youth group are playing in the second team – will the rest have a chance to taste the feeling of playing professional football?
- We have decided that this team will be under Radi Zdravkov’s guidance. This does not mean that we will give up from the first place. We are simply going to continue by counting on the boys who are born in 2000 who are only a year younger than the competitors’ players. Again – this does not mean that we do not want to win titles - we simply would like to build quality players, not just good team formations. We have taken precautions for the proper development of the most talented boys. They have special training programs in order for them to raise the level in any possible way.

If you compare our Academy to the other in Bulgaria, which qualities do we have that separate us and do we need to improve something?
- We do not have anything to improve compared to them. We had little time to start the whole thing and we progressed fast. We already have a coach for every age group as well as goalkeeper coaches and a physiotherapist. We have Spanish Methodists and a psychologist, too. I would like to add that every game and even some practice sessions are videotaped and later analyzed. We have provided perfect conditions for all the kids at the academy for which the parents do not pay anything. We might have something to perfect but now we can say that we have everything we need. Razgrad is a quiet town and there are no distractions. The big success is ahead of us and it all depends on the people.

What do you expect from the upcoming spring semi-season?
- I expect to see an ever bigger improvement in the boys, especially those who are close to being professional players. Dimitar Dimitrov took some of our talents – Svetoslav Kovachev, Daniel Naumov and Dominik Yankov. He knows them well, because he watches all the games. Ivaylo Klimentov did not go with the other three because of an injury and a surgery after that. I can say that Dimitrov cares a lot about the boys from the second team and is ready to count on them. We are happy to see the interest in the fans about our academy and we have more and more spectators. I thank the fans for the support. I believe they will be even more this spring. We will reward them with quality football and a lot go goals, because this is the team’s philosophy – to be able to show beautiful and attractive game style with nice results.