Jakub Swierczok: I believe that I will be successful with Ludogorets

Hours after he signed his new contract in Sofia, Jakub Swierczok was officially introduced in Turkey where the team is preparing for the upcoming... 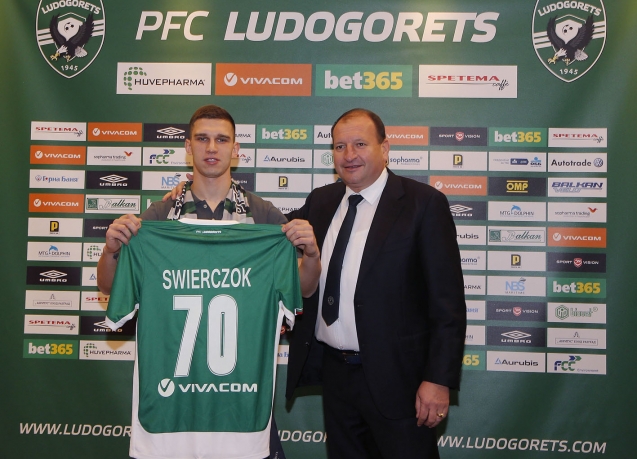 Hours after he signed his new contract in Sofia, Jakub Swierczok was officially introduced in Turkey where the team is preparing for the upcoming matches. The Sports Administration Director of the club Georgi Karamandzhukov presented Swierczok with the №70 T-shirt and wished him a lot of scored goals wearing it. Immediately after the ceremony the player gave a short interview for the club website.

- Welcome to Ludogorets, Jakob. What are your first impressions?

- Everything is perfect. I know the team; I have seen a few of the Champions League games. My compatriot Jacek Goralski has told me a lot about the team. In Zaglebie I had a teammate who has been a part of Ludogorets and has great memories from his time here – Lyubomir Guldan. He also told me about the initial success of the team and the first title. I met with the management of the team – the owner and the Sports Director. I am impressed by the way they treat the team and myself.

- How would you describe the player composition?

- Ludogorets does not have any competition in Bulgaria. I know there are a lot of skilled players in the team and I like that. A striker will always want to have classy players around him on the field because it is easier for everyone. The most important thing for me now is to be able to focus on the preparation so I can be in my best shape for the official matches.

- What are your goals?

- I would like to help the team for the 7th consecutive title and also for an excellent performance against Milan.

- What do you think about the opportunity to play against one of the greatest Italian teams?

- It is truly exciting. Every player would be honored to play against such teams and I am no exception. I am happy to have the opportunity to play on this level in the European tournaments.

- This is not your first transfer abroad. You have been in Kaiserslautern.

- Yes, but during my time in Germany a lot of things happened for a short period and I did not have the chance to develop my career. Three different coaches were assigned during my stay, and later I got injured. I could not stand out in Germany, but now I have the chance to do leave a mark abroad and I believe that I will be able to do so now.