A new amazing game for Ludogorets on the European scene! This time the Bulgarian champion defeated 2:0 Braga as the visiting team and now they are... 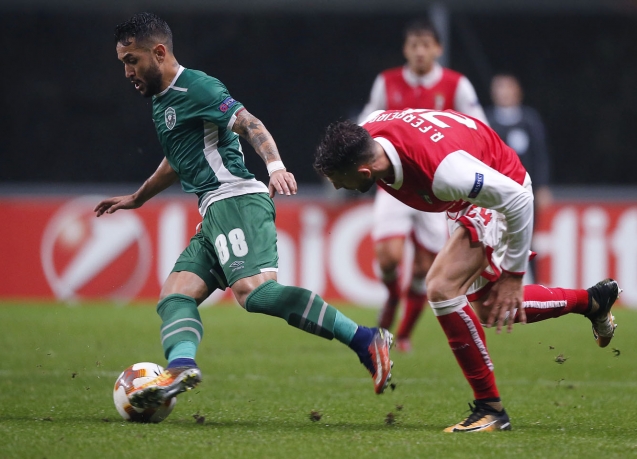 A new amazing game for Ludogorets on the European scene! This time the Bulgarian champion defeated 2:0 Braga as the visiting team and now they are the group C leader in Europa League. Cosmin Moti opened the score in the 25th minute, and Jody Lukoki added the second goal in the 56th minute.

With this success the team from Razgrad wrote a new page in Bulgarian football history, because never before did a Bulgarian team win in Portugal - Bulgarian teams had only one even score out of nine total matches between Bulgarian and Portuguese teams before this game.

The match started with a minute of silence in memory of the victims of the Portuguese forest fires.

Ludogorets almost got themselves a penalty shot in the very first minute when Plastun tried to shoot far ahead with his head after a corner and then a Braga player purposely played with his hand, but the referee remained silent. The Portuguese responded with an attack in the fourth minute, but eventually the ball made a ricochet in Plastun’s leg and the bell went into a corner.

In the 8th minute Ricardo Fereira did score a goal, but it was cancelled due to an offside. Later Forster almost scored in Renan’s gate, but luckily the ball went pass the right gate beam.

The game continued with attacks towards both gates and during one of them the Bulgarian team got a corner. Wanderson shot towards the center, Moti was the quickest and after a perfect head shot he scored for 1:0.

Just two minutes later Wanderson broke through ahead an almost scored, but Mateus jumped and saved.

Until the end of the first half Ludogorets played better than their competitor, had more playing time, and the other team got a few yellow cards spared for a few rude penalties they made.

Ten minutes after the beginning of the first half Braga got a chance to even the score when Raul Silva was alone after a corner shot, but Renan showed his reflexes and saved with his head from a 3-4 meter distance.

Ludogorets responded and in the 56th minute they scored the second goal. Jody Lukoki caught the ball after a pass from Viana to Mateus and overthrew the gatekeeper and after slightly hitting Silva’s leg, who tried to intervene, the ball flew right into the net.

Renan saved skillfully in the 62nd minute after a dangerous shot by Martins.

After the second goal the Bulgarian team chose to stay in their half and performed counterattacks mostly. Hero’s players made a good defense, but also a few mistakes upfront and that did not allow them to play in the center.

Fransergio tried his luck in the 70th minute, but the ball hit Anicet’s arm, for which Braga wanted a penalty shot, but the Italian referee did not allow it. A little later he ordered the Portuguese coach to leave the field after another of his nervous reactions.

Ricardo Fereira jumped high in the 88th minute and shot with his head, but Renan saved again and showed his class. Ludogorets counterattacked before that and the ball was in Keseru’s possession, but he was very short of scoring the third goal.

The home team tried to score at least one goal by the end of the game time, but Ludogorets’ defense was strong enough.

In the end “The Eagles” achieved their second win in a row in what is called “The group of death” and is the leader with their 7 points. Braga is now second with 6 points, followed by Hoffenheim, who have three points after today’s 3:1 win over Istanbul Basaksehir, who are last with only one point.