Ludogorets showed strength and achieved a prestigious 0:0 score against Istanbul Basaksehir. This was the first game of the group phase of Europa... 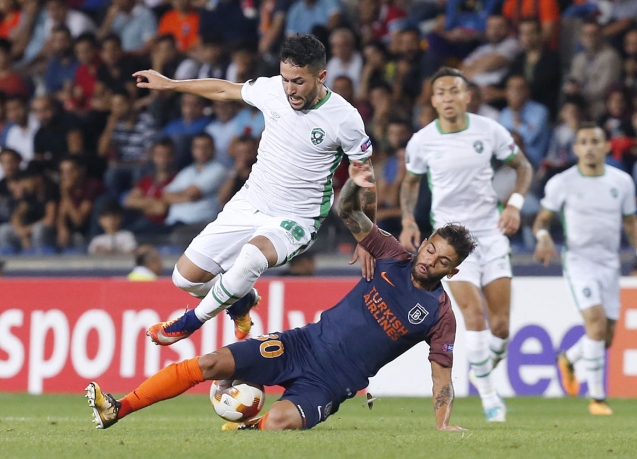 Ludogorets showed strength and achieved a prestigious 0:0 score against Istanbul Basaksehir. This was the first game of the group phase of Europa League. The champions played very good and with a little more luck they could have walked out of “Fatih Terim” stadium as the winner. Part of the host team’s composition was really notable, like the former Arsenal, Manchester City and Real Madrid players Emmanuel Adebayor, the member of the French national team Gael Clichy, the Dutch former Juventus player Eljero Elia, the Turkish Emre Belozoglu and the much loved by the Razgrad fans Junior Caicara.

The first dangerous situation occurred ten minutes after the start, when Epureanu shot with his head after a foul kick, but the ball went out. “The Eagles” responded with a dangerous shot by Joao Paulo, but he sent the ball over the other team’s gate. Four minutes later Wanderson showed his good technique and shot from a 20 meter distance, but Babacan saved. Lukoki passed to Joao Paulo in the 22th minute and he shot with his head, but the Turkish gatekeeper intervened again and kicked the ball into a corner. Seconds later Lukoki took advantage of Clichy’s mistake and shot the ball like a cannon, but Babacan saved again, sending the ball into a corner.

Abel Anicet made a mistake in Ludogorets’ penalty zone during the first minutes of the second half, Emre got to the ball, but Broun jumped at his feet and saved what was surely a goal. The counter attack by Ludogorets provided an opportunity to take the lead. Lukoki passed to Joao Paulo, who was alone against the gatekeeper. The Brazilian was not accurate at all. Broun tried to pass to Plastun in the 61st minute, but passed to Mosoro instead, after which he threw himself again towards his feet and corrected his mistake. Seconds later Broun saved a powerful shot by Visca. Mevlut Erdinc received a pass behind the Bulgarian defenders’ backs in the 77th minute, but Broun went forward again and used his body to prevent Erdinc from getting further, and the ball went out.

In the next game in group C of Europa League Ludogorets will be host to Hoffenheim on 28th of September. In their other game the Germans lost to Braga with a 1:2 score in their home town.