Ludogorets achieved its third prestigious victory over a strong team from the capital. 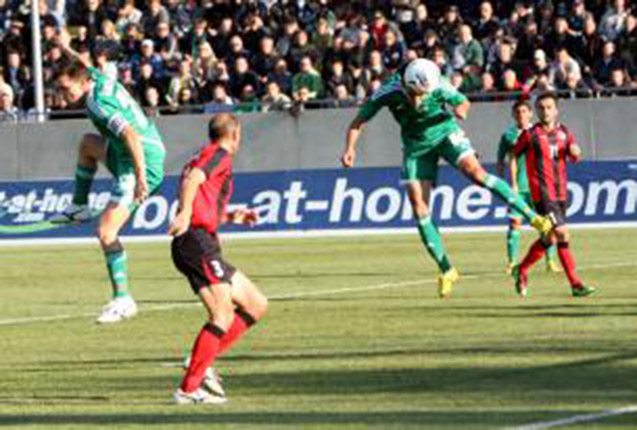 Ludogorets achieved its third prestigious victory over a strong team from the capital. “The eagles” outplayed “the railwaymen” with the incontestable result of 4:0, before 5000 spectators at the Ludogorets Arena.
The team got back on top triumphing with a 10th victory since the beginning of season in A Professional Football Group. Ludogorets led the entire game, while the players were literally having fun on the field with entertaining for the spectators shots and heel passes.
Two goals each were scored by Marcelinho and Stanislav Genchev. The Brazilian initiated the scoring in the 31st minute, with head, after a through-ball by Choco.
Another successful shot was made by Stanislav Genchev in the 47th minute. Only a couple of minutes later Marcelinho scored 3:0. Final result’s goal was scored by Stanislav Genchev again, in the 90th minute of the match.
Marcelinho is already nearly on top of the goal scorers list with a total of 8 successful shots. This was his third game in A Professional Football Group with two goals scored.
“Ludogorets has excellent, well adapted players. It’s impressive that, being a newly formed team, the boys are playing as if it’d been 2-3 years that they were playing together. There’s a very good collaboration between Bulgarians and foreigners. Their mood is getting heightened with every goal scored. The team has an appearance.”, said head coach of Lokomotiv Sofia, Anton Velkov, at the end of the match.
He underlined that, with no mean to underestimate Lokomotiv’s players, he had to admit that the team made many mistakes.
„We played in a good mood, with flair, and I’m happy that we ended the game with four goals scored. Loko Sofia is a big team and we did good”, stated “the greens” coach Ivaylo Petev after the game.