Ludogorets lost but the chances remain 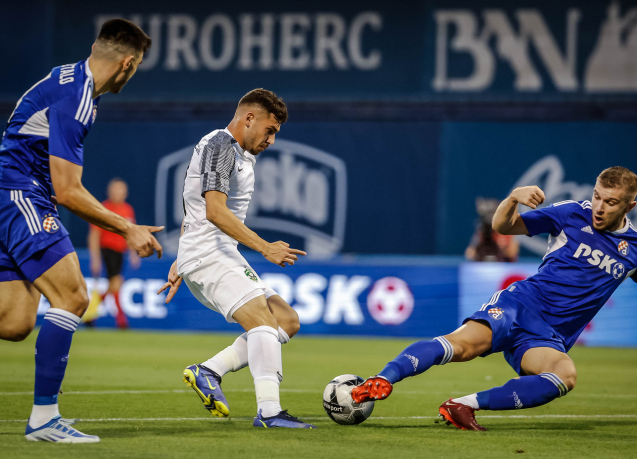 Ludogorets registered 15 goal attempts against Dinamo Zagreb, but lost 1:2. The Croatian club achieved two goals between the 6th and the 9th minute – one scored by Peric and an own goal by Padt. Tekpetey scored the only goal for Ludogorets. His goal was enough for Ludogorets to have the chance to continue ahead.

Cicinho passed the ball to Sotiriou in the second minute and the latter tried to score, but Lauritsen stopped the ball. Piotrowski tried to score after the following corner kick, but he missed the gate by a couple of centimeters.

Dinamo took the lead in the 6th minute. Peric outplayed Verdon and left Padt no chance to save. Padt made a mistake after Ljubicic tried to score and sent the ball into his own gate. Padt saved what was going to be a certain goal in the 15th minute. The referee spared Peric a red card before that. Peric held Sotiriou while he was storming away.

Tekpetey added a goal in the 22nd minute. Piotrowski tried to score, but a Dinamo defender kicked the ball back. It went straight into Tekpetey’s possession and he scored easily. Cauly almost evened the score in the 30th minute, but he sent the ball above the crossbar.

Padt was injured, and Sluga replaced him during the break. Sadly, Cauly was injured as well and Yankov took his place. Ludogorets almost evened the score again in the 47th minute when Jonathan tried to score, but the gatekeeper kicked the ball into the woodwork. The home team insisted that the ball entered the gate, but this did not happen. Rick tried to score again in the 55th minute, but he missed again.

Tekpetey received a yellow card an hour after the match began. Therefore, he will miss the rematch.

The Eagles picked up the pace. Tekpetey completely outplayed one of Dinamo’s defenders. He passed the ball to Sotiriou and the latter almost scored. The gatekeeper intervened successfully. Sotiriou almost achieved a headshot, but he hit the crossbar.

Dinamo almost added a third goal in the 83rd minute, but Menado sent the ball above Sluga’s crossbar. Tiago was the last player to try to even the final score, but he was not lucky as well.