Ludogorets finished their last friendly match for the training camp with the defeating result of 7:0. 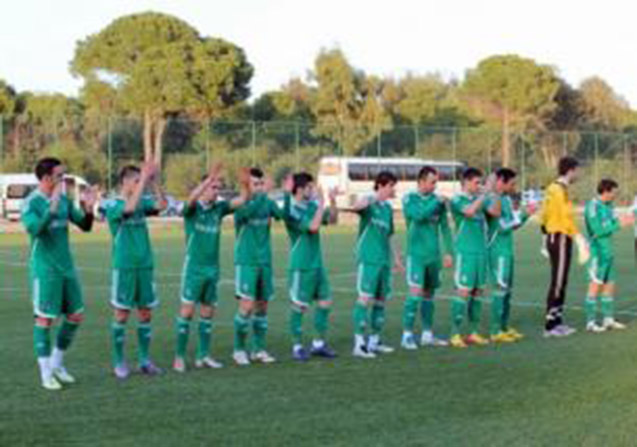 Ludogorets finished their last friendly match for the training camp with the defeating result of 7:0. The opponents from the Moldovan team Nistru were under “the eagles’” control the entire time. Ivaylo Petev’s boys had even more situations with a chance of scoring.
The referee brigade was also interesting, representing 4 beautiful Ukrainian women, accurately doing their job on the field.
The Ludogorians put pressure on the opponent since the very beginning of the match. The first shot at Nistru’s goal was in the 10th minute, but the goalkeeper saved it. Marcelinho was the scorer of the first goal, after Vitinha broke through and shot.
In the 32nd minute the defender Alexandre Barthe had to leave the field because of a knee injury. His place was taken by Tero Mantyla.
In the 35th minute Yordan Minev broke in from the right, shooting towards Ivan Stoyanov, he continued in Miroslav Ivanov’s direction, who doubled Ludogorets’s lead.
Short before the end of the half-time Emil Gargorov made a classical result, scoring from a penalty shot, awarded for a foul against Vitinha. At the beginning of the second half-time the Bulgarian team missed some situations to score.
Head coach Ivaylo Petev brought in 7 new players in the 73rd minute. Dimo Bakalov, who entered during the second half-time, scored 4:0 in the 75th minute. Three minutes later Christian Kabasele also left his mark in the Moldovians’ goal.
Two more goals were scored by Choco and Georgi Kostadinov in the last minutes of the match.