Ludogorets still leader after a draw against Chernomorets

Ludogorets missed 2 points, yet remained on top of A Group. 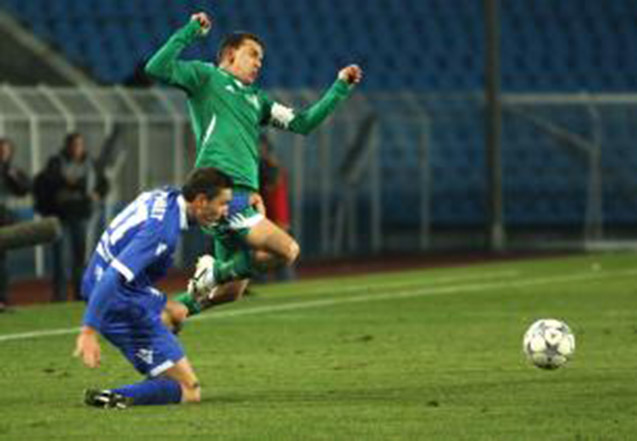 Ludogorets missed 2 points, yet remained on top of A Group.

After the 0:0 final result with Chernomorets, “the eagles” are still current leaders in the championship, having a number of points equal to CSKA – 32. However, the goal difference is in favour of Ludogorets, thus the team has 29 goals scored and only 5 conceded.
It was a close-run battle at Lazur stadium in Burgas. Both of the teams fought hard the full 90 minutes.

First half-time competition was situated in the middle of the field, the two teams taking turns in priority.

In the 15th minute Ivaylo Petev’s boys were close to scoring. Miroslav Ivanov managed to overcome Chernomorets’s defence and kicked towards the goal, however, the goalkeeper saved the ball.

Ludogorets took the initiative passed the 20th minute. The visitors were close to scoring in the 21st and the 25th minute, thus a successful shot didn’t occur. Attack from Gargorov, passing to Marcelinho, was blocked by the hosts’ captain Trayan Dyankov.

Hosts’ attacks got more frequent during the second half-time. 58th minute Juju dropkicked the ball towards Lorival Asis, yet the Brazilian’s shot was loose.

Same minute Stanislav Genchev, of Ludogorets, kicked towards the goal from a 12 meter distance but couldn’t score.

Despite of being the better team on the field Ludogorets didn’t manage to get 3 points of the visit in Burgas. „I’m glad that our defense didn’t let the hosts score a goal. We had some situations, however I think it’s a reasonable result. We’re not happy with this one point, because we wanted to win.

It’s a thrill to play against Hero. He is one of the best coaches in Bulgaria, and not only in the country. It’s an honor to play against him.”, said Ivaylo Petev, Ludogorets’s head coach, at the end of the match.