Another victory for Ludogorets, against Kaliakra

Ludogorets keeps the leading position in A Group current rank, after a hard yet sweet victory over FC Kaliakra. 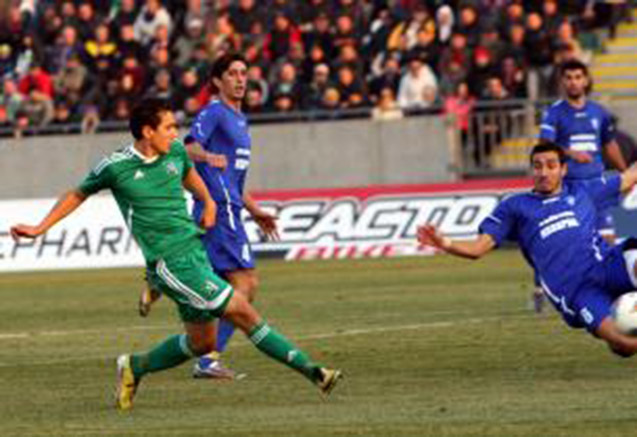 Ludogorets keeps the leading position in A Group current rank, after a hard yet sweet victory over FC Kaliakra. “The eagles” won with 2:0 against the team from Kavarna, goals being scored by Mihail Aleksandrov and Christian Kabasele. Both successful shots were scored during the second half-time – in the 69th and 94th minute. Over 4000 true fans from the entire region witnessed the duel.
Ludogorets was prevailing over the adversary the entire match, yet the lack of concentration, at times, as well as some bad luck, dispensed the team with a more salient win. After a rather boring first half-time, Ivaylo Petev’s boys came out motivated, raising the rhythm.
“The eagles” could’ve taken the lead scoring in the 46th minute, but Dimitrov managed to punch clear. Anyhow, Ludogorets managed to lead thanks to Mihail Aleksandrov, who was well brought out into the penalty area, scoring his third goal as a part of the team of Ludogorets. 76th minute, an excellent opportunity opened up for the substitute Christian Kabasele to double the score, but he missed. Three minutes later, the players of Kavarna left with one player less, after Anton Dimitrov having received a second yellow card, respectively, a red one for serious foul against the goal scorer Aleksandrov.
At the end of duel, the game got quite frequently interrupted because of the continuous fouls made by the players, and during the additional time awarded by the referee, Kabasele made use of a good drop kick in the penalty area, changing the score to 2:0 with head. After this victory Ludogorets remains leader in the current rank with 35 points, Kaliakra, on the other hand, staying in the dropping out zone with 6 points. According to statistics, Ludogorets is the only team for the last 5 years, having more than 30 goals scored for 14 rounds.
"Only thing that I’m glad about is that we won the three points. I could make claims about the way my team played, especially during the first half-time – we weren’t convincing. We talked about this all week, however what we’ve achieved up to this moment may more or less make us adopt a loose approach. We played rather poorly, yet we had several goalscoring opportunities, commented manager Ivaylo Petev after the match.
"Second half-time we played with more aggression, we scored two goals and won the three points. It’s a football thing, we can’t play 15 matches at high level. I could say that a couple of times we underestimated the team of Kaliakra. Stanislav Genchev’s recuperation is going fine and he will be ready to play on Wednesday.”, said also Ludogorets’s manager.

Victory for Ludogorets, against Kaliakra