Ludogorets lost from Valencia in the first 1/8 final

Ludogorets lost from Valencia in the first 1/8 final of tournament Europa League. The spanish team won with 3:0. 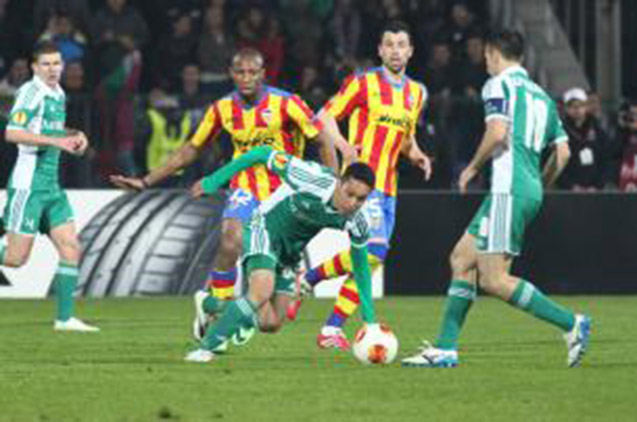 Ludogorets lost from Valencia in the first 1/8 final of tournament Europa League. The spanish team won with 3:0.

Valenica led with 1:0 in the 5th minute. Baragan opened the result with strong shot on ground after a pass from Jeremy Matiyo. The important moment was in 24th minute. After a good atack Mihail Aleksandrov was pushed down in the penalty area by Keita. The referee judged a penalty kick and suspended the defender. But Roman Bezjak has no luck this day and the goal-keeper of Valencia saved his penalty shot. No matter that good moments came for Ludogorets and few times Stoycho Stoev's men were close to equalize. In 33rd minute the nigthmare for the champions was complete after 0:2 for Valencia. Alkacer passed to Kartabia who left no chances for to Vlado Stoyanov. Ludogorets could be back in the game after that, but strong kick of Misidjan met the bar.

During the second half-time Ludogorets has domination, but Valencia reached 3rd goal after a mess in the penalty area of the "eagles". Philippe Sanderos scored by head after a pass from Vargass. At the end of the match Junior Quixada received a red card and both teams finished the match with 10 players eached.