The Bulgarian champion Ludogorets is writing a history

The Bulgarian champion Ludogorets is writing a history. 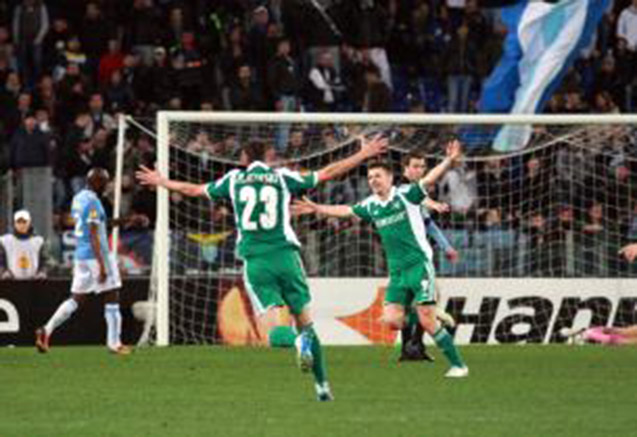 The Bulgarian champion Ludogorets is writing a history. The “eagles” won with 1:0 Lazio at Olimpico Stadium in Rome in the first 1/16 final of Europa League and took a great lead before the rematch at VasilLevski Stadium next week. Roman Bezjak scored priceless goal in 45th minute/ The Slovenian national surprised the goal-keeper of the roman “eagles” Berisha with a fine shot form 25 meters. VladoStoyanov was also great and did couple of good saves and repelled the penalty of Anderson in the beginning of the second half-time.

The match was full with dramatic moments. In the 8th minute, Lazio midfielder Lorik Cana was adjudged to have handled Mihail Aleksandrov's cross inside the area.SvetoslavDyakov tried to shoot in “Andrea Pirlo” style but the Slovenian didn’t move and caught the ball. But the “eagles” continued to play good. In the 34th minute luck was with Lazio when Marcelinho shot hit the crossbar. But nothing could save Berisha in the 45th minute after great shot of Bezjak. In the first half the hosts had just two threats came after the implementation of a free kick. Two minutes into the second half Vladislav Stoyanov intervene decisively after shot of Anderson. Only 120 seconds later the referee gave a penalty for Lazio for a foul on Yordan Minev. Anderson stood behind the ball, which shot into the right corner was saved by the great Vlado Stoyanov.

After 53 minutes Ludogoretswas with a man less after a second yellow card for Svetoslav Dyakov. Italians tried pressure, but didn’t create serious problems for Vlado Stoyanov and defenders in front of him. After 73 minutes, the referee Zwayer expelled Kavanda for rough foul on Jordan Minev. Shortly thereafter reserve Eshpinho saved Ludogorets of goal after killed the ball on the line and helped decisively to another historic victory of champions.