Ludogorets took a lot of honors in the poll "Football player of the year". The ceremony was held on Thursday evening in Sofia. 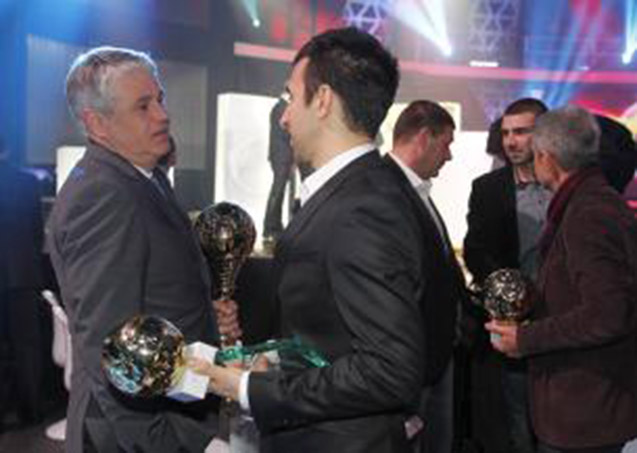 Ludogorets took a lot of honors in the poll "Football player of the year". The ceremony was held on Thursday evening in Sofia. Stoycho Stoev was set to coach No. 1, and his runners are the national head coach Lyuboslav Penev and former mentor of Eagles Ivaylo Petev, who currently leads the Cyprus AEL.

Vladislav Stoyanov was voted for the best goalkeeper. National, who is in the ideal team of the Europa League, won with a murderous lead over Plamen Iliev of Levski, Georgi Petkov from Slavia and Georgi Kitanov of Cherno More.

Svetoslav Dyakov is no. 1 among midfielders. The captain of Champions prevailed squarely in the battle with Simeon Slavchev from Litex Lovech and Vladimir Gadzhev from Levski.

Marselinho is the best foreigner in Bulgarian football. The interesting thing here is that the competition on the Brazilian made two other stars of Ludogorets-Virgil Misidjan and Roman Bezjak.

One vote does not reach to Yordan Minev to be no. 1 among the defenders. The national stayed second behind Valentin Iliev from CSKA.

Journalists have designated Svetoslav Dyakov for no. 3 in the battle for player of the year. Second ranked the captain of the national team Ivelin Popov and winner was Ivan Ivanov from Basel, who in the summer with team Partizan played against Ludogorets in the third qualifying round of the Champions League. As is known, the Eagles defeated the Serbian twice -2:1 in Razgrad and 1-0 in Belgrade.