Ludogorets breaks records after 2:1 in Zagreb

Ludogorets ended the participation in the group phase of Europa League in amazing way. 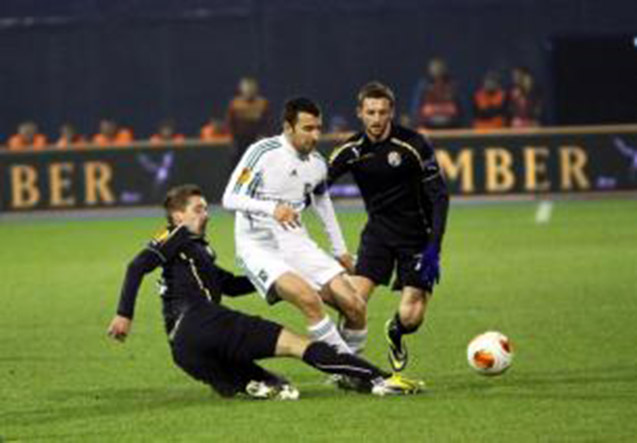 Ludogorets ended the participation in the group phase of Europa League in amazing way. The champions won with 2:1 Dinamo at Maksimir in Zagreb and won the group with 16 points. The Eagles are the only team who has eight victories in one edition of European club tournament. Till this moment the record was on Levski.

The success of Ludogorets in Zagreb came after the goals of Dani Abalo in 28th minute and Roman Bezjak in 72nd. For the Croatians scored Chop in the prolongation of the first half-time.

The match started good for the both team but the homes acted aggressive and did some quick attacks but with no danger for the debuted in the Euro tournaments Ivan Cvorovic. After the 15th minute Ludogorets took the initiative and Dani Abalo missed a good situation in 26th minute. Mihail Alexandrov made a powerful angled shot but the Spanish player missed the target. 2 minutes later Abalo scored. Not long after firing hopelessly off target from a deep delivery from the right, Dani Abalo produced an ice-cool low finish after first-time passes from Bezjak and Marcelinho left him with just Sandomierski to beat. the home side equalised on the stroke of half-time, Čop heading in smartly from close range after Zvonko Pamić's corner had been deflected back to him.

The second parte started with a pressure from Dinamo as the clearest situation for the homes was for Fernandes but he shot in out. In the 72nd minute Ludogorets was leading with 2:1. Slovenian striker Bezjak slipping the ball past a defender and then beyond goalkeeper Grzegorz Sandomierski after being fed by Dani Abalo from the right.