Ludogorets performed great and won 2:1 against the second team in the Bundesliga – Hoffenheim. In front of the full stadium in Razgrad, the champions... 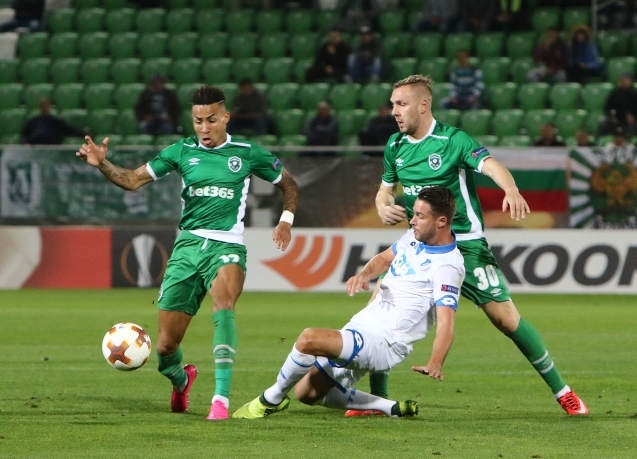 Ludogorets performed great and won 2:1 against the second team in the Bundesliga – Hoffenheim. In front of the full stadium in Razgrad, the champions left no chance for one of the strongest German teams recently. The match became a historical event, because “The Eagles” were hosted a game for the first time on “Ludogorets Arena” during a group phase of the European tournaments.

The visiting team from Germany took the lead in the second minute, when Cosmin Moti made a mistake with his pass to Natanael and Kaderabek got in control with the ball and after playing with Uth, he sent the ball into Broun’s gate from a close distance. Dimitar Dimitrov’s players immediately went ahead and after a shot towards the center by Lukoki in the 8th minute a member of the other team played with his hand in the penalty zone, but the Polish referee did not decide for a penalty. In the 15th minute the Germans were very close to their second goal. Moti was not accurate and the scorer Uth found himself in a good position, but Igor Plastun intervened and kicked the ball out with a precise split. Natanael tried to shoot in the 19th minute, the ball went to Anicet and he missed a huge chance, kicking the ball with his left foot. After several minutes with playing around there were no clear situations until the 42nd minute, when Natanael shot with real firepower towards Hoffenheim’s gate, but Baumann saved.

The second part started excellent for the Bulgarian champion. Svetoslav Dyakov made the score even in the 47th minute. This was the 50th match for the team captain in an European tournament, wearing Ludogorets’ T-shirt. He received the ball in the air and left no chance for Baumann to save, thus the score was 1:1. This made the other team anxious and the game became less smooth. In the 67th minute the Germans was again close to a second goal. Rupp was alone in the penalty zone and shot, but Jorge Broun made a skillful save. And then came the 72nd minute, when the tables were turned! Marcelinho overplayed two of Hoffenheim’s defenders and passed to Campanharo, who then passed ahead to Lukoki. He broke through from the left and with an amazing shot he literally made the spectators in Razgrad explode, turning the score into 2:1!!! Until the end, the other team, guided by the boy-wonder among the coaches – Julian Nagelsmann, tried to even the score, but did not create any real goal situations. Ludogorets could have added a third goal through Keseru and Guralski.

The next game for “The Eagles” will be against Braga in Portugal on 19th of October. In the other game of the group the Portuguese team won 2:1 against Istanbul Basaksehir.