The construction of the new V sector at the site of “Ludogorets Arena” continues with a very fast pace. The start of the construction works was in... 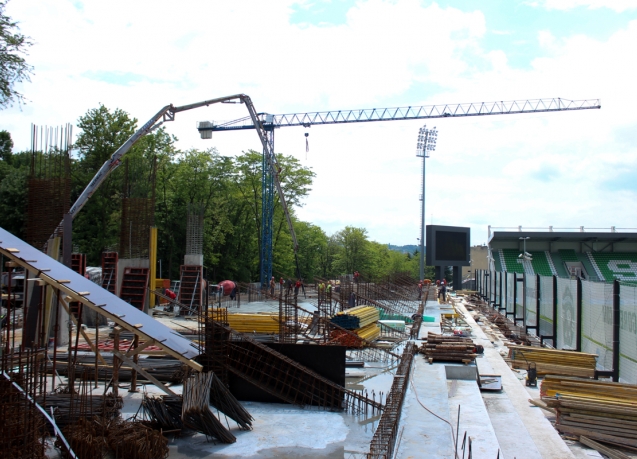 The construction of the new V sector at the site of “Ludogorets Arena” continues with a very fast pace. The start of the construction works was in April, and half of the new sector is already completed. Despite the limitations for the building team, which are due to the actual regular using of the stadium, they are determined to meet the deadlines.

These construction operations are a part of an expansive investment program initiated by the club, the purpose of which is to guarantee that the stadium with all the facilities will be eligible for hosting games of the group phase of the European club tournaments under the UEFA requirements, as well as to ensure the maximum comfort of the spectators. The design of the new V sector will be close to how the “Moti”grandstand looks, and it will have a few different seating zones, all of which with the best view towards the playing field. The plans for the sector also include a temporary VIP zone, as well as a catering zone for the official attendants during the games of the European club tournaments and the Bulgarian championship.

The capacity of the new sector is a little more than 3,500 seats, and after the full reconstruction of the other sectors, the “Ludogorets Arena” stadium will have more than 12,500 class “4” seats, which makes it possible to host games of the group phase of the Champions League and Europa League.