Ludogorets won another trophy after defeating Levski with penalty shots

In just two days the Ludogorets Academy added two new BFU trophies in its showcase. The talents born after Jan 1st 2003 won over the strong team of... 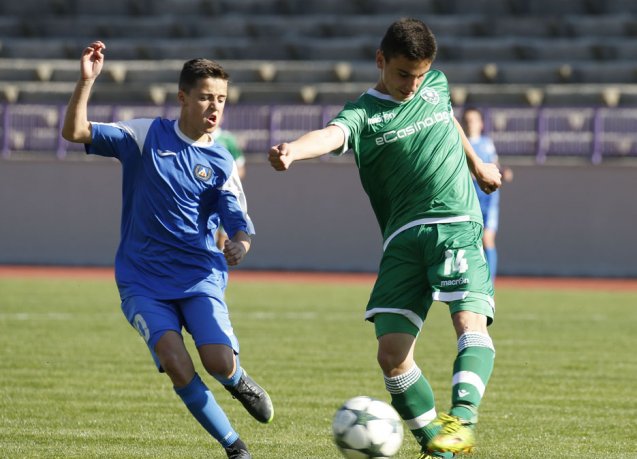 In just two days the Ludogorets Academy added two new BFU trophies in its showcase. The talents born after Jan 1st 2003 won over the strong team of Levski after shots from the penalty point – 10:9. In the regular time of the game which was played on “Ivaylo” stadium in Veliko Tarnovo, the score was 1:1.

The young players of Ludogorets showed a very serious discipline and understanding of tactics during the whole game. They were well better placed and with better coverage of the empty pieces of the field. Despite that fact Levski opened the score in the 10th minute with Daniel Nachev’s goal from the offside point. This made the team from Razgrad more active and Todor Zhivondov and Georgi Kerkelov’s boys totally overplayed the other team.

The goal for the even score of 1:1 was scored in the 47th minute by Lyudmil Nedelchev, who managed to perform it after a quick counterattack over the right side, and a shot from the center by Bozhidar Vladimirov and a pass from Kristiyan Kostadinov. Until the very end of the game it was an intense one, but without any real goal situations.

During the penalty shots the boys from Razgrad showed some nerve and managed to grab the victory with a 9:8 score. Ludogorets’ gatekeeper Martin Petkov saved his net in an important moment, while Bozhidar Vladimirov scored the last goal in cold blood, thus delivering the victory to the talents from the Ludogorets Academy.