The champions lost with 2:4 from Litex

Ludogorets made first home loss in NEWS 7 football championship for the present season. 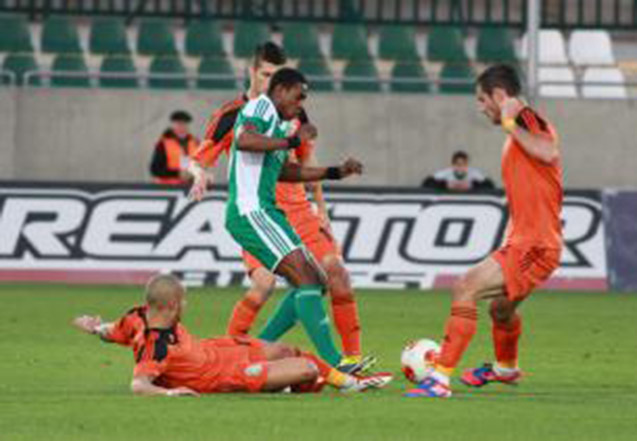 Ludogorets made first home loss in NEWS 7 football championship for the present season. The champions lost with 2:4 from Litex in a strong match that will be remembered with some disputable judging of the head referee Ivaylo Stoyanov.

The game started in a terrible way for Ludogorets. The guests from Litex led with 0:3 till the 31st minute. Miroslav Manolov opened the result in 18th minute. Nikolay Bodurov doubled in the 25th. Six minutes later the referee Stoyanov judged a penalty kick for Litex after he saw a foul of Cosmin Moti against Miroslav Manolov. Behind the ball was Jurgen Jazula and he scored. In the same time Mihail Alexandrov and Virgil Misidjan missed from clear positions and the half-time ended with a big advantage for the guests.

.From the first moments of the second half Ludogorets was looking to get back into the game and succeeded by scoring a goal. In the 51st minute Virgil Misidjan scored with a great shot from edge of the penalty area. The “eagles” continued to push and they became close on scoring the second goal in 64th minute. Than after a good cross from the right, the ball reached Misidjan in the goal-keeper area, the Dutch winger shot and hit the hand of Strahil Popov in front of the goal line but the referee didn’t judge the obvious penalty. The match became nervous on the maximum and Litex scored a fourth goal in the 80th minute when Simeon Slavchev threw over Vlado Stoyanov. In the last minutes Ludogorets turned one more hit. The captain of the champions scored from the penalty kick, settled for a foul against Junior Quixada. The Brazilian and Nikolay Bodurov from Litex were kicked-off a little bit after a fight on the pitch.