Ludogorets failed to win in its second control on Turkish soil, drawing 1:1 with Zaglebie Lubin. An unofficial debut for the "Eagles" was made by... 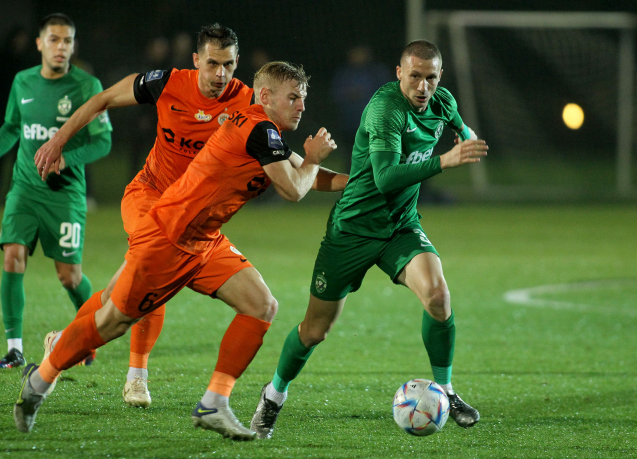 Ludogorets failed to win in its second control on Turkish soil, drawing 1:1 with Zaglebie Lubin. An unofficial debut for the "Eagles" was made by Franco Russo, who was signed from Mallorca just a few days ago.

The Poles opened the score in the 39th second. Denny Grupper made a mistake, Chodina took the ball from him, broke from the right and found Starzynski, who expertly sent the ball into Simon Sluga's net.

Ludogorets could have equalized in the 15th minute. Bernard Tekpetey broke free from the Zaglebie defense but his shot went over the bar, ricocheting off a polish defender. After half an hour of play, Chodina had an opportunity to shoot, but he missed the goal. In the 36th minute, Jorginho crossed magnificently to Tekpetey. The Ghanaian fought off a Zaglebie player, but missed the goal with his head.

The logical thing happened in the 40th minute and Ludogorets equalized. Tekpetey was prompt. He received a pass from Jorginho and with a powerful shot with his left foot he did not leave any chances to Burić - 1:1.

At the break, Ante Simundza fielded a completely new 11 men. This time, Spas Delev played as a winger, and Georgi Terziev was the right back. The second half started strongly for Ludogorets, as already in the 51st minute Kiril Despodov was brought out well, took over with his right foot, but with his left and the goalkeeper of Zaglebie saved. However, the Poles showed their teeth and could have taken the lead again in the 70th minute, Pienko eliminated Igor Plastun with ease and opened a shooting position, but Sergio Padt made an extremely masterful save.

In the 73rd minute, Bartholomew Kludka from Zaglebie received a second yellow card and a red card respectively for delay. However, the Poles did not remain with a man less, and Bartolewski returned to the game.

120 seconds later, Dinis Almeida was close to his first goal with the Ludogorets team. Spas Delev put the ball on the head of the Portuguese, who would, but the goalkeeper of Zaglebie saved, albeit with difficulty.

Until the end of the match, Ludogorets pressed, but Zaglebie managed to hold on and in the end not lose.