Ludogorets lost 0:1 to Loko (Sf) in front of empty stands at the stadium in Nadezhda district. The goal for the home team was scored by Carlos France... 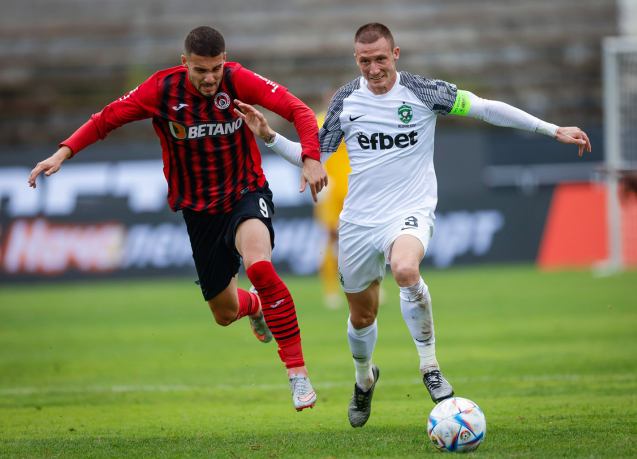 Ludogorets lost 0:1 to Loko (Sf) in front of empty stands at the stadium in Nadezhda district. The goal for the home team was scored by Carlos France in the 71st minute, and the "eagles" played with a man less for almost the entire game after Cicinho's red card in the 14th minute. Otherwise, at the very end, Antonio Vutov also went to the dressing rooms.

Thus, after 22 matches, the coach of Ludogorets, Ante Simundza, lost a match from the First League. He bet on the best, saving no one for the important visit of HJK Helsinki, which is on October 6. The starters were national players Kiril Despodov and Anton Nedyalkov, who recorded 2 matches each for the "lions". Otherwise, in the 58th second, Bernard Tekpetey had an excellent opportunity. He broke in from the right, feinted Kamen Hadjiev, but missed the goal. After that, Jakub Piotrowski could have opened, but he didn't hit.

In the 11th minute Kiril Despodov led with a pass with an outside falt behind center Bernard Tekpetey. He ran away from the defense and shot to the ground, but Alexander Lyubenov saved. In the 14th minute, Ludogorets was one man short. Cicinho received a red card for a header. On the subsequent cross, Bozhidar Katsarov shot, but Anton Nedyalkov cleared in front of the goal line. In the 20th minute Cauly brought Thiago alone against Lyubenov, but the guard shot again. An off side was also marked, but it was very thin. At the beginning of the second half, Franca from Loco SF tried his aim, but it turned out to be inaccurate. Manuel Shaw tried a long shot to Lyubenov, who caught it safely. The exchange of shots continued and Ivaylo Naydenov was very close to the goal, but Sergio Padt was lucky.

In the 56th minute Ludogorets missed its best chance. Kiril Despodov was brought behind the defense, he made a great stop, but he was alone against Lyubenov and was unable to overcome him. Seconds later, the Eagles made a wonderful attack as Cauly attempted a pass to the completely uncovered Kiril Despodov, but a Loko SF defender intervened with an excellent split and cleared for a corner. Igor Thiago's shot followed, but in an out.

In the 71st minute Loko SF struck their shot. Iliya Dimitrov led France admirably on his own against Sergio Padt. The goalkeeper initially intervened, but the ball ended up in the Brazilian, who scored with a header - 1:0 for Stanislav Genchev's team.

15 minutes before the end of the match another of the new Brazilians - Pedro Naressi - made his debut for Ludogorets. He was kicked very roughly by Antonio Vutov in the 87th minute, thus Levski's youngster was also sent off with a straight red card. Until the end, the guest team tried to press, but did not get anything interesting, except for one shot by Tekpetey, which was straight at Lyubenov.