Ludogorets played a very strong match at "Benito Villamarin" but lost 2:3 against Betis. The first more dangerous shot of the match was sent by... 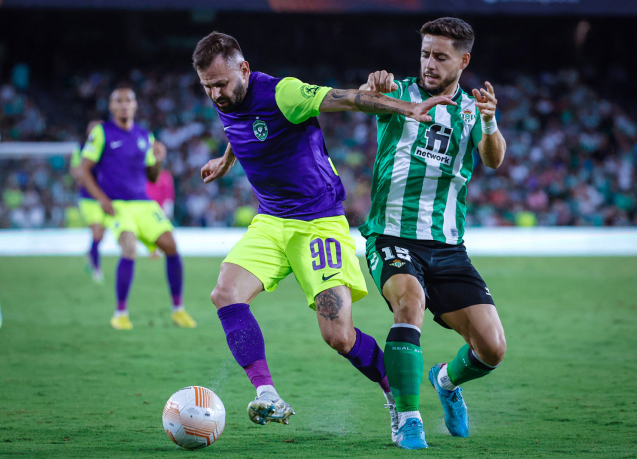 Ludogorets played a very strong match at "Benito Villamarin" but lost 2:3 against Betis.

The first more dangerous shot of the match was sent by Bernard Tekpetey but Claudio Bravo kicked it for a corner.

In the 25th minute, Betis took the lead. Sergio Padt was tested with a long-range shot, cleared but the ball fell to Miranda who immediately put it back for Luis Enrique who beat Cicinho and converted. Cauly could have equalized just seconds later, but his shot fell into the hands of Claudio Bravo. In the 40th minute the legend Joaquin showed a moment of genius and with a technical kick left no chance for Sergio Padt.

However, Ludogorets did not bow the head but reached a goal. At the very end of the first half, Kiril Despodov converted from a foul reducing the score.

It was Betis' first goal conceded at home this season.

In the 50th minute Ludogorets counter-attacked, Cauly brought Tekpetey but Bravo handled it. After the resulting corner, Thiago shot a header but straight at the goalkeeper.

In the 59th minute Betis scored a third goal. Sergio Canales was accurate, who masterfully freed himself from Piotrowski and surprised Padt with a strong shot.

In the 75th minute Ludogorets scored a second goal. Its was from Rick Jhonatan who with a shot on the ground did not leave any chances to Claudio Bravo. In the extra time of the match Danny Grupper found himself in an excellent position, had an opportunity to shoot, but did not hit the goal.