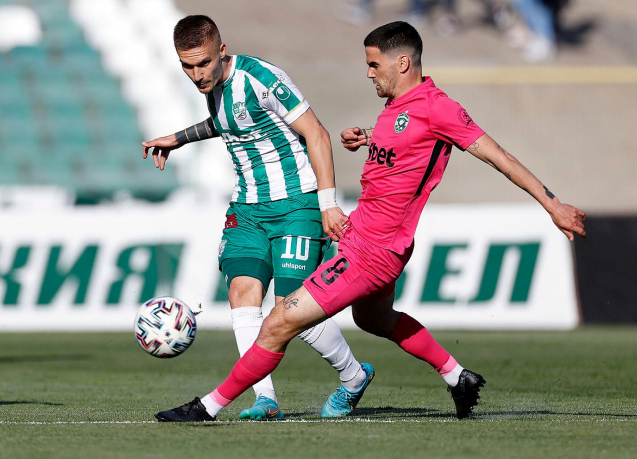 The Bulgarian champion now how has the chance to officially win the 11th consecutive title in the next round of the championship. If Ludogorets defeats Slavia, the title would be secured, regardless of the outcome of the CSKA – Levski match. If both teams win, the advantage of Ludogorets which is now 12 points would remain, but the goal ratio of the matches between Ludogorets and CSKA is in Ludogorets’ favor, therefore, the title would become a fact.

Yusein tried to score about 25 minutes after the match began, but Cauly changed the ball’s trajectory and it went into a corner. Until that point, Ludogorets controlled the ball more. Beroe relied more on fast counter attacks.

Oliveira almost scored with his left foot in the 37th minute, but he sent the ball outside the woodwork. Despodov’s direct free kick sent the ball above Ganev’s crossbar.

The guests from Razgrad created another attack. Cauly and Sotiriou joined forces, and the latter passed the ball to Tekpetey who scored, sending the ball between Ganev’s legs. Simundza sent Jonathan on the pitch later. Kamara passed the ball to Fall in the 77th minute and Padt tried to outplay Beroe’s playmaker. He did it and the ball went out.

Spas Delev entered the pitch during the added time and almost scored, but Ganev reacted and saved.