Kiril Despodov: I am happy to join Ludogorets

Everyone will be allowed to buy tickets for the...

Ludogorets with a prestigious draw against Everton, at Goodison park

The Bulgarian champion achieved a prestigious result against the elite English team Everton. 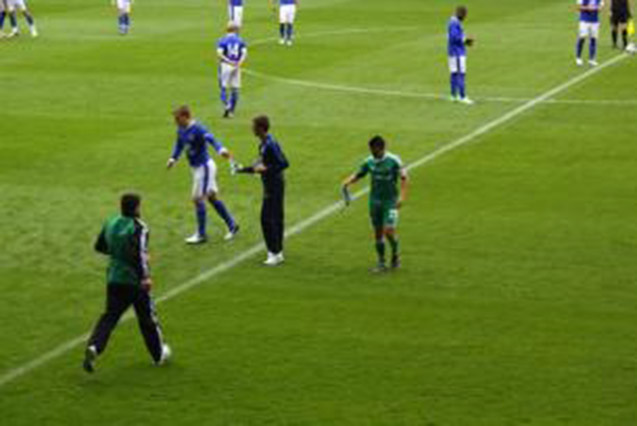 The Bulgarian champion achieved a prestigious result against the elite English team Everton. “The eagles” played with confidence, and made a worthy performance at the legendary Goodison park, which, by request of the hosts, was closed for spectators and televisions.

The goal for Ludogorets was conceded by Marcelinho, who, in the 69th minute scored into Tim Howard’s goal. After a pre-rehearsed direct free-kick and Gargorov’s shot, the ball ended up at the feet of the Brazilian who scored against Everton.

Leighton Baines conceded in favor of the hosts in the 43rd minute. He scored from a penalty kick, awarded for Caiçara’s infringement, holding Anichebe inside the penalty area.

The attacks of “the eagles” towards Tim Howard’s net started in the 3rd minute, when the titular player Dimo Bakalov was led by Marcelinho, but his shot ended out.

The hosts pressed the visitors after the 20th minute, with a series of attacks. Nikica Jelavic shot but Ivan Cvorovic cleared. Steven Naismith, led by Marouan Fellaini, broke through and took a shot, ending up, however, in hitting the crossbar, in the 27th minute.
Naismith directed a few more dangerous hits towards Ludogorets’s goal, which Cvorovic masterly cleared.
A dangerous situations for “the eagles” in the 58th minute was saved by Lubomir Guldan. The defender intervened when Nikica Jelavic managed to pass over Cvorovic, and the defender cleared from the goal line.

A heavy rain poured down on the players in the end of the match. The hosts scored in the last minutes, but the goal wasn’t counted because of an offside.

The two teams were taking turns on goal-scoring opportunities in front of the two goals until the last referee signal, and, respectively, they ended even.