The strong performance of Ludogorets in the friendlies continues and the team nearly scored a victory over the famous Bundesleague team Stuttgart. 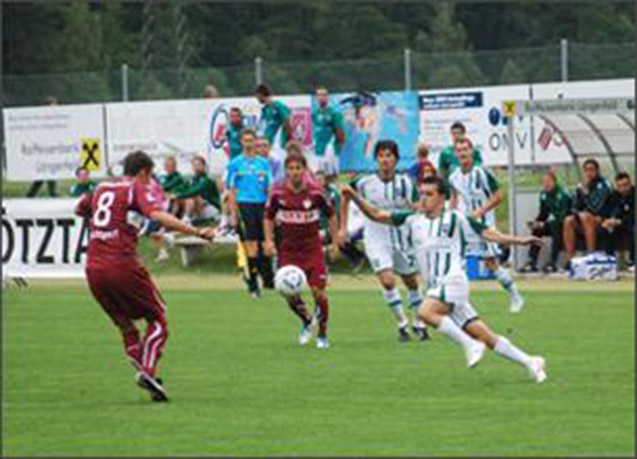 The strong performance of Ludogorets in the friendlies continues and the team nearly scored a victory over the famous Bundesleague team Stuttgart. The friendly took place today, at the Langenfeld stadium in Austria, where the German team has its preparation currently running.

Ivaylo Petev's boys made a strong entry and it was a simple lack of luck that stopped them from scoring in Stuttgart's goal. The German team appeared in its starting eleven, wherein German, Austrian, Hungarian and Italian national players.

The successful attacking of Ludogorets down the wings forced the opponent to play cautiously. The changes in Stuttgart's team didn't help either, resulting in a nil-nil equal, where Ludogorets being the team to regret more for the missed victory. The overall impression of the specialists who attended the game was an extremely high level of the team, though being in the middle of preparation.

The team owner Kiril Domuschiev, accompanied by the Executive director Angel Petrichev, arrived in the training camp to support the team and make sure that preparations is going according to plan.

Domuschiev was pleased with what he witnessed.

"I'm contented with the performance of Ludogorets. We're still working on the practice and skills of the team, since there are a lot of new players. You saw that Ludogorets had a much better presence on the field." – commented Domuschiev.

"The only thing to regret is the fact that we didn't score a goal, since we had six possible game situations. I'm pleased with the boys. There's a strong competition on the bench as well. The coaching team also is very good." – he added.

He shared his certainty about the teams victories in the next friendlies, respectively, against Al Ahli and Parma.