Ludogorets made a golden double, becoming champion of Bulgaria 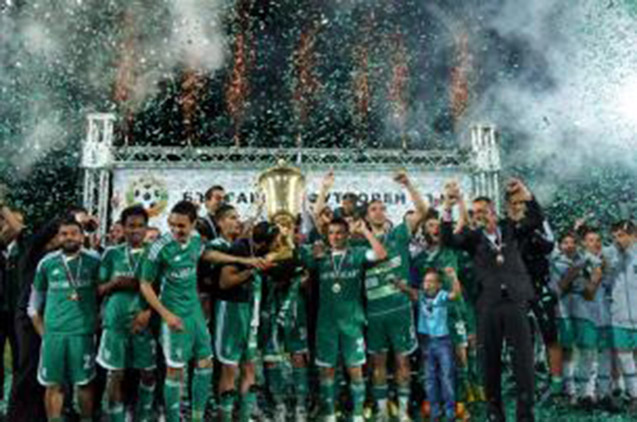 Ludogorets broke all national records, consecutively passing through 3rd division, crossing 2nd division, reaching the elite and becoming champion of Bulgaria. Just a week ago “the eagles” won the Cup of Bulgaria.

The ecstasy of thousands of people from Razgrad at the Ludogorets Arena stadium continued with a procession on the streets of Razgrad, where the fans were congratulating their heroes – the team champions, taking pictures with the cup.

The game against CSKA started with the supremacy of “the green ones”, who didn’t stop attacking the goal of the red. Two dangerous shots by Miroslav Ivanov and Ivan Stoyanov passed an inch away from the goal. In the 11th minute Emil Gargorov managed to score, but the head referee judged an offside.
The only goal was scored in the 19th minute, when Miroslav Ivanov took a perfect direct free kick and planted the ball in the upper right corner of the visiting team’s goal.

The second half-time was full of dramatic clashes, and ultimately, both teams ended with 10 players on the field. Angel Granchov had a direct red card for stepping on Stanislav Genchev.
At the beginning of the second half-time the head referee Georgi Kabakov, who was chosen by lot to preside over the final, expelled also CSKA’a coach Stoycho Mladenov from the bench area, claiming for a red card for Svetoslav Dyakov.

Ludogorets also left with one player less, when in the 58th minute Dyakov received a second yellow card for offence against Moraes.
The pressure of the visitors until the end of the game was controlled by Ludogorets’s defense and stopped multiple times by the perfect presentation of the goalkeeper Uros Golubovic, who saved some dangerous situations.

The entire green stadium celebrated together with Ludogorets’s players, washed in champagne by their coach Ivaylo Petev.A cannonade of fireworks fell down from the sky over Ludogorets Arena, and the players were showered with confetti, while triumphing with the cup.

The medals for the A PFG first place were presented to the players by the member of the Bulgarian Football Union management board Kamen Kostadinov.
Until late in the evening hundreds of fans were taking pictures with their heroes and the Champion’s Cup, coming to Razgrad for the first time since the establishment of the club in 1945.