Ludogorets lost against Milan with a 0:3 score in their first game of the 1/16-finals of Europa League in front of the overcrowded stadium in... 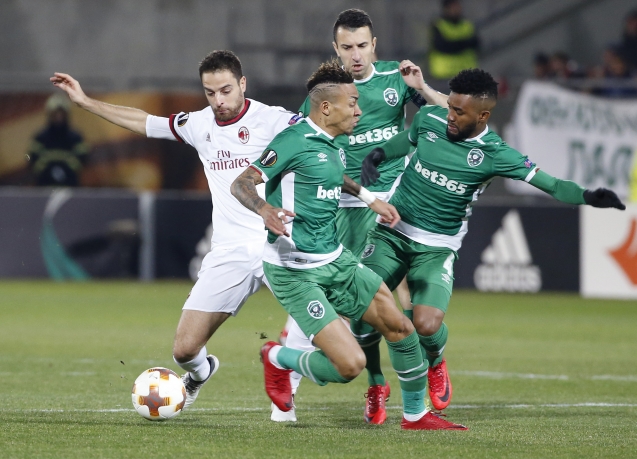 Ludogorets lost against Milan with a 0:3 score in their first game of the 1/16-finals of Europa League in front of the overcrowded stadium in Razgrad. The Bulgarian champions performed great, but the lack of enough concentration did not allow a better result. Milan won for the first time in ten years as a visiting team during direct eliminations in the European Tournaments. The last time they did this was in 2007, when Bayern was defeated after the Champions League rematch in Munich with a 2:0 score. The first game in Milano ended 2:2. Milan won the tournament then.

Dimitar Dimitrov promised that Ludogorets will play bravely and that is what we say in the beginning. Swierczok was leading the attack while Wanderson remained on the replacement bench. Ludogorets played with a 4-2-3-1 configuration with Sasha and Cicinho in front of Renan. Moti and Plastun were in the center of the field and Anicet and Dyakov were in front of them. Marcelinho, Lukoki and Misidjan were placed behind Swierczok.

Dimitrov’s colleague Rino Gattuso decided to use all of his best assets, thus showing his respect to Ludogorets by not underestimating them.

The first dangerous situation in the game was in front of Milan’s gate. Lukas Sasha passed to Misidjan in the 5th minute, but the Dutch was stopped by Abate’s penalty against him, for which the Milan player received a yellow card. Lukoki kicked the ball from the foul point, but the ball went just over the crossbar. In the first 20 minutes Ludogorets was particularly aggressive and made things for Milan very difficult. In the 20th minute the visiting team made a nice combination in the penalty zone and Cutrone made an attempt to score, but the ball was diverted after a ricochet in the foot of one of the defenders and went into a corner.

“The Eagles” were creating pressure over Milan and they had a hard time organizing their performance during most of the first half. The star player Suso could hardly be noticed in the first half of the game, and during the brief moments he was in possession of the ball, he did not handle it right.

Just when the first half was about to end, Ludogorets sent the ball into a corner. Milan played with the ball for a bit and then Calhanoglu passed to Cutrone, who tried to lay with his head, but he accidently diverted the ball with his back, sending it into Renan’s gate, thus making the score 1:0 for Milan.

During the half time Dimitrov replaced Swierczok with Wanderson. IN the beginning of the second half Ludogorets took the initiative and created a situation in the 50th minute. Wanderson and Marcelinho passed to each other and managed to pass through Milan’s defense line, but Marcelinho’s shot was not powerful enough and Donnarumma had no trouble saving. Milan was lucky again when Dyakov’s shot hit the right gate beam of the other team’s gate in the 54th minute.

Moti played with his hand and pushed Cutrone while they were in the penalty zone. The attacker took advantage of the situation and immediately fell to the ground. The referee immediately decided that it was a penalty. The replacement layer Rodriguez who came out a little earlier taking Abate’s place, was accurate and made the score 2:0.

The Bulgarian champion slowed down after the second goal and Milan was in charge of the game until the end. During the added time the replacement player Borini scored the third goal for Milan.

A curious fact is that the coach Dimitrov decided to let the 19-year old Svetoslav Kovachev play. The player from the youth academy of Ludogorets made his debut in a European tournament.