Important announcement from the management of PFC...

There is a limited supply of tickets for the...

The coach Pavel Vrba and the defender Cosmin Moti...

An own goal, plus another 4 scores, and Ludogorets got 3 points from the match with Svetkavitsa

Ludogorets won over Svetkavitsa after a spectacular and productive game. 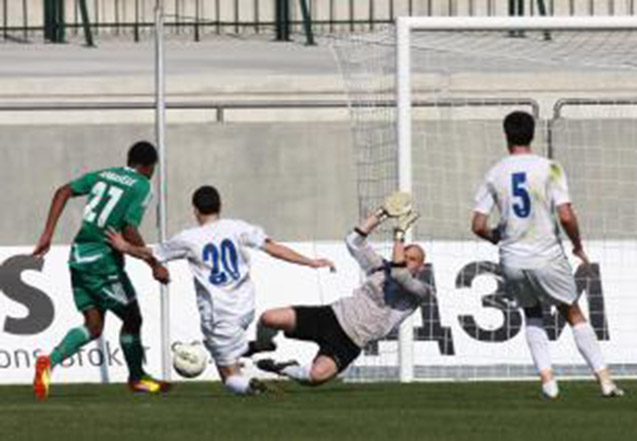 Ludogorets won over Svetkavitsa after a spectacular and productive game. “The eagles” had the control at the field, pushing the opponents in their half.

The score was open in the 45th minute, when, during a contest in front of the hosts’ goal , the defender Petar Trifonov made a mistake and scored in his own team’s goal. The spectacular own goal totally crushed Svetkavitsa’s defense and they gave up for the entire second half time.

At the second half Christian Kabasele substituted Dimo Bakalov who missed a couple of scoring situations. The pressure in front of Ivan Georgiev’s goal intensified due to multiple attacks in the 64th and the 66th minute, however, a goal wasn’t conceded.

The second goal was scored in the 67th minute when Miroslav Ivanov stroke Svetkavitsa’s goal with a 22 meter shot.

3:0 was scored by Christian Kabasele who entered in the second half time, being also the scorer of the final fifth goal conceded in the 90th minute.

Georgi Kostadinov marked his debut with a goal just 6 minutes after his entrance in the 78th minute. „Own goals have occurred even at world championships, that is why I didn’t say anything to Petar Trifonov. We managed to oppose the leader to a certain degree. We wanted to make more substitutions but our bench is short. Our entire squad costs as much as one player of Ludogorets”, explained after the end of the match Svetkavitsa’s head coach Alyosha Andonov.

„We weren’t that varied as a style of playing, but we created 80 percent of the scoring situations. Georgi Kostadinov made a good debut”, commented Ludogorets’s head coach Ivaylo Petev.