Ludogorets performed great against Hoffenheim and qualified for the Europa League 1/16 finals after the even 1:1 score

Last night was market by another great match for Ludogorets in the European tournaments. The champions achieved an even 1:1 score against Hoffenheim... 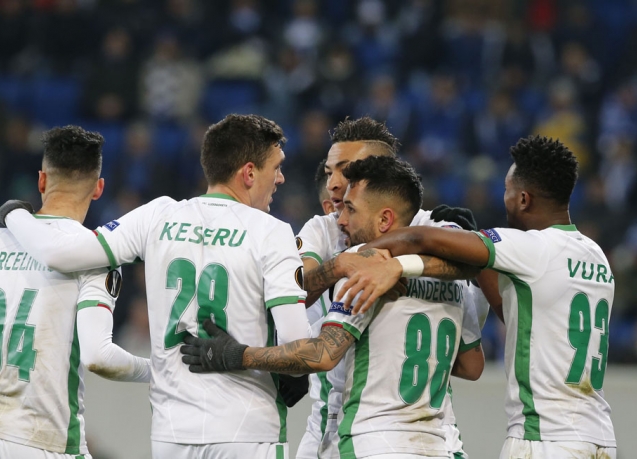 Last night was market by another great match for Ludogorets in the European tournaments. The champions achieved an even 1:1 score against Hoffenheim in the last group C match of Europa League, and this was enough to qualify them for the 1/16 of the tournament for the third time in the club’s history. ”The Eagles” finished on second place in their group with a point less than Braga, who lost 1:2 to Istanbul Basaksehir. Philipp Ochs scored the first goal in the 25th minute, and Wanderson added another in the 62nd minute after a nice combination. Ludogorets had to finish the game one player short, because Keseru was given a red card in the 80th minute, but it was a bit of exaggeration.

The home team managed to score in the first half, and it was really the only attempt they made that actually found the gate. Ludogorets spent more time controlling the ball, but did not manage to create a difficulty for Kobel.

After the half time the coach Dimitrov decided to put Keseru into the action, thus the team became more offensive. The champions had a clear supremacy and created more situations in front of Hoffenheim’s gate. Marcelinho passed to Wanderson in the 62nd minute, and the midfielder managed to outplay one of the other team’s players, before sending the ball into the net from a relatively hard position, making the score 1:1. The Bulgarian champion had the chance to completely turn the score around in the 73rd minute, when after a quick counter attack Wanderson and Misidjan went alone against one of the other team’s defenders, but the Brazilian hesitated for a second and made a mistake.

The Germans created some pressure in the last few minutes, but did not create any serious situations in front of Renan. Ludogorets had an amazing opportunity in the 90th minute, when Misidjan missed to score in an empty gate

The draw on 11th December in Nion will determine Ludogorets’ competitors ahead. Among the possible teams are Arsenal, Milan, Atletico Madrid and Sporting Lisbon.