Ludogorets experienced a lot of misfortune against Istanbul Basaksehir

A very unlucky turn of events happened to Ludogorets in the game against Istanbul Basaksehir. The champions lost 1:2 to the leader of the Turkish... 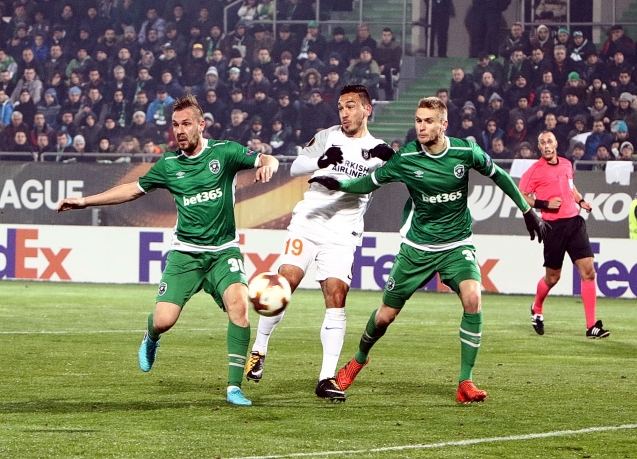 A very unlucky turn of events happened to Ludogorets in the game against Istanbul Basaksehir. The champions lost 1:2 to the leader of the Turkish championship, but there is still a chance to qualify in the next phase. “The Eagles” need at least one point from the match with Hoffenheim on 7th of December. The Germans are out of the tournament after they lost 1:3 to Braga.

During the first half the visiting team allowed two goals in an 8-minute window. Visca opened the score in the 20th minute, and Frei added a second goal in the 28th minute. Ludogorets did not manage to put themselves together until the half time, though they stayed more in the other teams’ penalty zone in the last few minutes.

Claudiu Keseru went was sent to the field after the half time and that boosted Ludogorets’ attacking power and the team pushed their competitor and as soon as the 47th they had the chance to return a goal, but Wanderson made a huge miss. The Brazilian passed to Keseru on the left and he returned the ball perfectly to him, but he missed to score in the empty game from just a two meter distance. However, the pressure Ludogorets created on the other team resulted in a goal. Marcelinho received the ball in the 65th minute after a pass from Misidjan and scored in Gunok’s gate with his head. The following ten minutes of the game were full of missed situations for Ludogorets. Plastun shot from the border of the penalty zone, but straight into the gatekeeper’s hands. Just two minutes later, another chance was wasted when Anicet passed to Wanderson who outplayed a defender and could pass to Keseru, but decided to try to score himself, sending the ball out. Another miss happened in the 71st minute – Goralski kicked the ball inaccurately but still reached Anicet, who immediately shot from the penalty zone, but the ball went over the crossbar of the gate. Plastun sent a real cannonball towards the other team’s gate, but Gunok somehow managed to save and the ball went into a corner Seconds later Keseru was very close to a goal after his kick from a 3-4 meter distance – the Istanbul gatekeeper again managed to save.

A second goal was not scored by Ludogorets until the end, and Renan showed his skills twice in the last minutes of the game, thus the score remained 1:2.

This situation leaves Ludogorets with a tough task in Germany. Ludogorets is out of the competition for the first two places, but is unlikely to play in a defeated manner. Braga qualified for the 1/16 finals, so the team will be visiting in Istanbul and the home team will be far more motivated to win.