Ludogorets U19 kicked of their participation in the UEFA Youth League with a 1:1 even score against Zeljeznicar (Sarajevo)

Ludogorets U19 achieved a 1:1 even score against Bosnia and Herzegovina’s champion Zeljeznicar (Sarajevo) in their first match from this year’s UEFA... 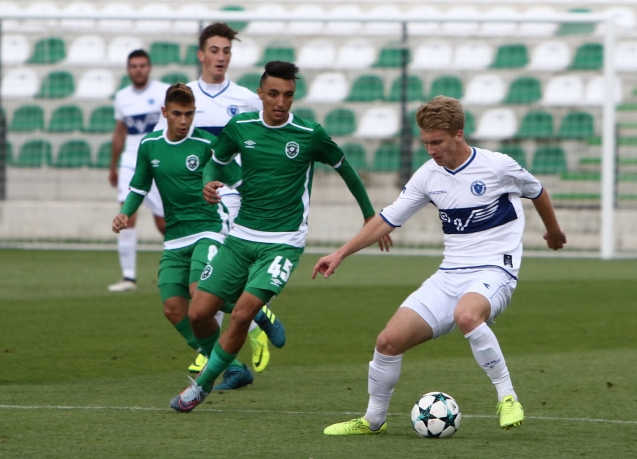 Ludogorets U19 achieved a 1:1 even score against Bosnia and Herzegovina’s champion Zeljeznicar (Sarajevo) in their first match from this year’s UEFA Youth League. Yuri Vasev’s boys played well and showed not only quality football, but manly attitude as well.

The first minutes of the game showed that “The Eagles” will rely on speed and technique, and their guests would count on their physical advantages. Zeljeznicar had the chance to open the score in the 7th minute, but Damyanov was aware and stopped the attack. Kovachev shot from foul point in the 12th minute and overthrew the wall, but the visiting team’s gatekeeper Dujmovic saved. Three minutes later Toni Ivanov and Martin Milkov made a good combination but the gatekeeper saved the shot that followed. Lachezar Kovachev passed to Ivanov ahead in the 26th minute but his shot was blocked in the last second by a defender. Kovachev shot from the foul point in the 30th minute but the ball went a little over the gate.Two minutes later Klimentov passed to Svetoslav Kovachev who shot accurately and made things hard for Dujmovic, but he managed to save after all. In the last minute of the first half Ludogorets was close to scoring twice – Svetoslav Kovachev overplayed a defender and shot, but only to miss the gate, and seconds after that Martin Milkov went ahead and passed the ball low to Toni Ivanov who shot and missed by a few centimeters.

The situation during the second half did not change. Ludogorets was more active and played with the ball longer, and the visiting team waited for their chance for counterattacks.  Minkov was alone against the gatekeeper in the 53rd minute, but Dujmovic blocked the shot. The ball went to Dominik Yankov, but his attempt was also not accurate. The old saying that if you do not turn your situations into goals, you will end up getting a goal turned out to be true in the 63rd minute. After a corner Mujagic jumped highest and scored with his head for 0:1. This did not break the hosts and they even became more determined. Five minutes later Svetoslav Kovachev fought for the ball, which was badly returned towars Zeljeznicar’s gate, and shot powerfully, but missed the gate. Toni Ivanov was clever and in the 71st minute he passed to the replacement Andrian Dimitrov. His shot went to the side of the gate. “The Eagles” waited for their time to come, and it came in the 87th minute when, after a pass from Dimitrov, Martin Minchev scored with his head, shaping the final 1:1 score. Just a minute before the end of the regular time the replacement Georgi Stoyanov broke through and tried to shoot, but missed. In the added time Andrian Dimitrov had his chance and shot low on the ground, but Dujmovic managed to stretch a leg and saved.

The rematch is in Sarajevo on 18th of October. If they manage to defeat this competitor, "The Eagles" will stand against the winner from the game between Dinamo (Bucharest) and Lokomotiv (Zagreb).