Ludogorets had their first practice at the stadium of Suduva

Ludogorets held their first practice at the Suduva stadium on Wednesday at 8:00PM local time. The session ended at 9:00PM. Before the practice, the... 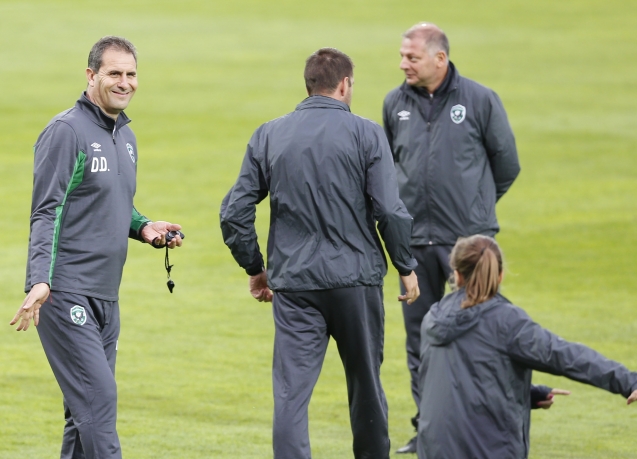 Ludogorets held their first practice at the Suduva stadium on Wednesday at 8:00PM local time. The session ended at 9:00PM. Before the practice, the Head coach Dimitar Dimitrov gave an interview for some local and Bulgarian media representatives.

“I hope that the calmness of the surrounding here in Lithuania will not deceive us. I tried to bring the right mood to the players in between the two matches. I do not consider Suduva for a weak opponent, on the contrary – they showed what they are capable of with their performance up until now. The game does not have a clear outcome. The result for the moment is very treacherous and we must be careful”, said Hero.

“We try to change our game pattern, like moving the ball out of our half. It takes time for such changes, because we practice a few things, but afterwards the players do not apply them on the field. We might have moved slightly forward, but we have a long way to go. When we qualify for the Europa League groups, then we will estimate our level and what we have to change”, also said Georgi Dermendzhiev’s successor.

“This is a serious problem – both Levski and CSKA upped their level. It is clearly visible by their attitude and their mood, showing the upward direction in the teams’ composition. Our problem is that lack the needed diversity of the team, our replacement bench is too short. We sold a few players and a few other have penalties, but the management ensured me that they are working on the selection. I do not want things to happen by any means necessary because I do not want to allow room for mistakes”, the coach added.

“It is far easier to work when you have a lot of classy players under your guidance. There is always margin for error, of course. I do now wish to comment about who will replace Marcelinho, because that will be a hint to our opponent. I just want to say that we are ready. We had a few tactical trainings. I took Marcelinho, Moti and Goralski with us so they can be close to the team and the bond would be easier this way”, Hero concluded.

Training before the game against Suduva