Spetema Coffee is officially the new sponsor of Ludogorets. A few days ago the team's main opponent for the title Levski also announced the same... 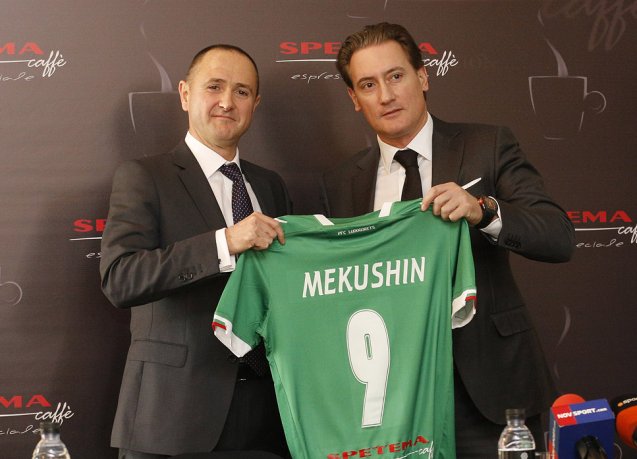 Spetema Coffee is officially the new sponsor of Ludogorets. A few days ago the team's main opponent for the title Levski also announced the same company. The presentation was attended by the President of The Eagles Kiril Domuschiev, owner of the brand Yanik Mekushin, Executive Director of The Champions Angel Petrichev, as well as the captain Svetoslav Dyakov. Before the press conference started Domuschiev handed shirt number 9 to Yanik Mekushin.

The Executive Director of Ludogorets Angel Petrichev stated that the conditions of the sponsorship contract are relevant to the team’s results. At the same time Mekushin clarified that for now the company is sponsoring only both of the clubs – Ludogorets and Levski. He refused to comment whether or not there are any differences between the terms of the clubs. “I am very happy to announce a partnership with Ludogorets who have achieved great results in the last years”.

Domuschiev, on the other hand, said that  according to him Ludogorets and Levski both led negotiations with Spetema. “The negotiations are harder with us because we are the champions and maybe that's why we presented this sponsor later. We have reason to set certain requirements. I am not one to agree easily, but when I do, I demand that we act as agreed. I can say that for a long time I have been drinking Spetema coffee, as well as the guests in our offices and at the stadium in Razgrad,” said Domuschiev. He admitted that he is negotiating with two international companies for sponsorship, as it is likely that in the summer Ludogorets will have a new shirt sponsor. Moreover, there is a vacant position, namely shirt number 9. The Spetema logo will be placed on the shorts of The Champions.